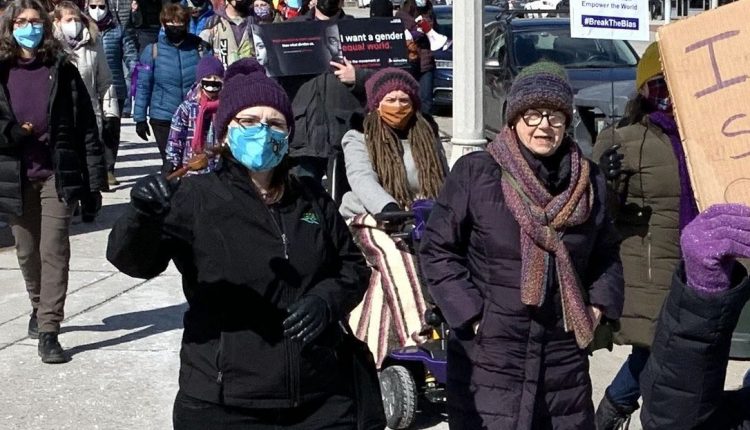 ‘We’re advocating for a gender-equal future for all’: Marking Worldwide Girls’s Day in Guelph

“I believe survivors!” was the message of one marcher’s handmade sign as a group of around 50 people made their way through downtown Guelph on International Women’s Day, March 8, 2022.

“Equality for everyone” was the call from a group of marchers who made their way through downtown Guelph to draw attention to International Women’s Day on March 8.

In years past, those celebrating the occasion locally have gathered at the Heffernan Street bridge, where they’ve danced together as part of a global call for equality and an end to violence against women. This year, they brought the event to city hall.

“I think what we wanted to do was something a bit more visible in the community,” said Guelph-Wellington Women in Crisis public educator Jensen Williams, one of the event’s organizers.

Approximately 60 people of all ages came out to Market Square at noon for the event, which was focused on the theme, “Break the Bias,” and the need to break down stereotypes related to gender.

“We’re advocating for a gender-equal future for all, regardless of gender identities,” Williams told the crowd.

“What we ultimately need to do is stop the normalization of inequality in all its forms,” she said.

31 drug poisonings in 2 weeks, together with 2 deaths in Guelph: public well being