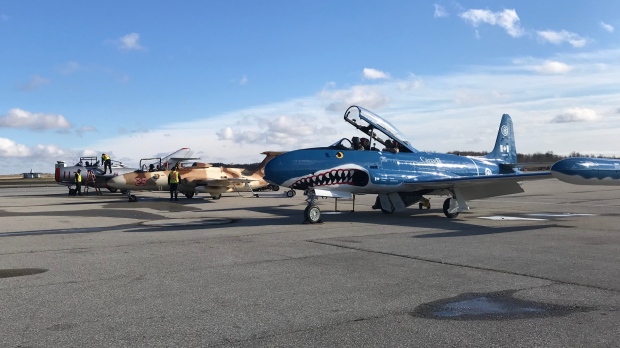 KITCHENER —
The Waterloo Warbirds flew over cenotaphs in Waterloo Region and Guelph on Remembrance Day in honour of those who serve and have served Canada.

“On this solemn occasion, Waterloo Warbirds thanks all those who have memories of friends and loved ones in the services and all who have paid the ultimate sacrifice for our country,” a message from the organization read in part.

“Our thoughts will be with you, and with them, this Wednesday morning.”

The first flight was scheduled to pass over all nine cenotaphs in Elmira, Waterloo, Kitchener, New Hamburg, Ayr, Galt, Preston, Hespeler and Guelph.

“They see when we fly over, they realize that other people are looking at them at the same time and it makes them feel good about the whole experience,” pilot Richard Cooper said.

Between 10:35 a.m. and 11:05 a.m., the aircraft was above Mount Hope Cemetery, Woodland Cemetery, Mount View Cemetery and Woodlawn Cemetery.

The plane has special meaning to Steve Zago, pilot and media coordinator for the group.

“That one is near and dear to my heart,” he said. “My grandfather has 300 hours in a Harvard during his time in the war and he flew one serial number away from that one.”

William Bartlett was a squadron leader with the Royal Canadian Air Force. In the Second World War, he flew with the British as a tactical bomber and reconnaissance pilot.

Zago remembers his grandfather every day, and especially on Remembrance Day.

“I’m so proud of my grandfather, he was a wise man,” he said. “He was my inspiration, he was my hero growing up.”

Those interested in seeing the Warbirds were asked to do so safely from near one of the locations mentioned above. The public was asked not to come to the Region of Waterloo International Airport because of COVID-19 restrictions.