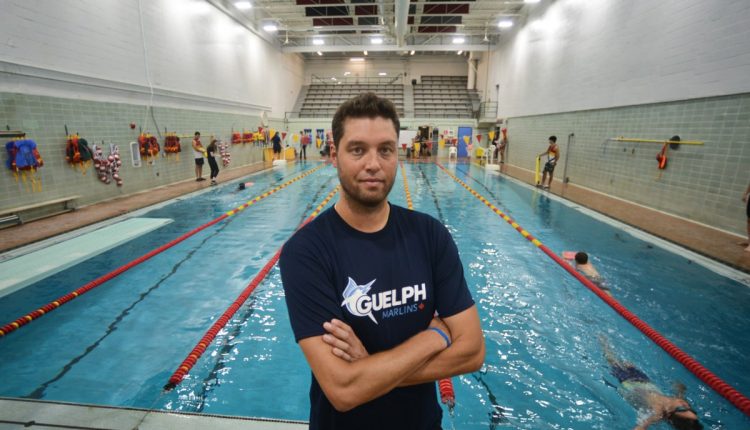 Pavlo Illichov, who represented Ukraine at the 2004 Olympic Games in Athens, left Ukraine with his family in late April

When former Olympic swimmer Pavlo Illichov and his family fled the conflict in their native Ukraine, they were unsure what the future would hold.

The 38-year-old’s hometown of Odesa has consistently been targeted by Russian troops since the invasion began in February.

“We tried to continue our normal life, but the sirens were everywhere,” Illichov told GuelphToday.

The family, including wife Antonina, his two kids, 12-year-old Arthur and nine-year-old Platon, and their dog, had a bunker underneath their home as well.

“Every five minutes, there would be sirens,” he said. “And then one blow, second blow, a rocket launches, we said ‘wow, we can’t live here, we have to go somewhere.'”

His son Platon, diagnosed with Type-1 diabetes a week after the conflict began, created another issue: having reliable access to insulin.

“Every volunteer from all over the world tried to come to Ukraine, or to the border of Ukraine, through Poland, Romania and tried to give everything we need,” Illichov said.

“But it’s not too easy, and for the first month, we can’t find the insulin. Only in our health centres, in our hospitals, they helped us.”

The family left the country at the end of April in a car they recently bought, making the short trip to Romania.

Pavlo – the primary caregiver in the family and required to be with his diabetic son – was allowed to leave the country legally, bypassing the ban requiring men to stay in Ukraine to fight.

“We go into Romania, then to Greece and we sent this online application to get visa when we decided to go to Canada,” Illichov said.

Then the family embarked on an 8,000 kilometer trip through Europe over the course of three months, through Romania, Bulgaria, Greece, Albania (where they lived for more than a month) and met his parents where they were staying in Germany.

“Everyone wanted to see us (before) we leave to Canada,” he said. “My mom said ‘wow, it’s too far away, where you going, why.’ I said we wanted to live in Canada, we want to live in a big country to continue our best lives.”

Along the way, they were able to get insulin for Plato.

“Volunteers helped in Greece when we arrived to Greece,” Illichov said. “There is a very big Greece-Ukranian community of volunteers, and they really helped us. They gave us, for more than three months, this insulin.”

They also got help in that respect in Germany.

For Illichov, finding work in Canada was an ongoing thing, and through social media, he found an opportunity.

“Guelph Marlins,” he said. “I found a message on Facebook that they need international coaches.”

Illichov, a swimmer since the age of eight, 26-time Ukrainian national champion, member of Ukraine’s swim team at the 2004 Olympic Games in Athens, Greece and professional coach since 2007, brings plenty of experience to the table.

He said the opportunity was great news, and after about a month of discussions and preparing, the family made the trip across the Atlantic Ocean.

“When we were flying, we were just a little scared because we are going to another continent,” Illichov said. “I know what I have to do here, but my family, they’re just a little nervous. I told them it would be okay, it’ll be alright, don’t worry, here (in Canada are) beautiful, good people.”

They landed in Ottawa just over a week ago, and it started rocky after the airline lost their luggage and nobody was at the airport to meet them.

But after the family boarded a bus, a train, hopped into a car and finally arrived at their new home in the Royal City, they met with Mary Gerrard and Laura Nicholls of the Guelph Marlins.

“They met us like brothers and sisters when (we arrived),” Illichov said. “They took my family into their hands and helped us in everything because we are really tired, not only of this situation of war in Ukraine, (but also the travel).”

After all that, it was when they went to dinner that night, Illichov remembers breathing a sigh of relief.

They then connected with host family JP Mooney, Kelly Hung and their daughter Brigid, who offered up space in their home for the Illichov’s to get their paperwork in order and begin a new life in a new country.

“This is one of the best deals in my life,” he said.

He’s already embracing Canada, and getting recognized already, though it’s not too difficult to spot him among a crowd, standing six foot six.

“I’m going to Walmart and someone called me (saying) ‘hey it’s Pavlo, new coach in the building.'” he said with a laugh. “I said ‘wow.’ They said ‘don’t worry, we know about you, we wait for the season workout start.'”

There is an effort by the swim club to help the Illichov’s get settled into Canada.

You can reach out to [email protected] for more information on how you can help.