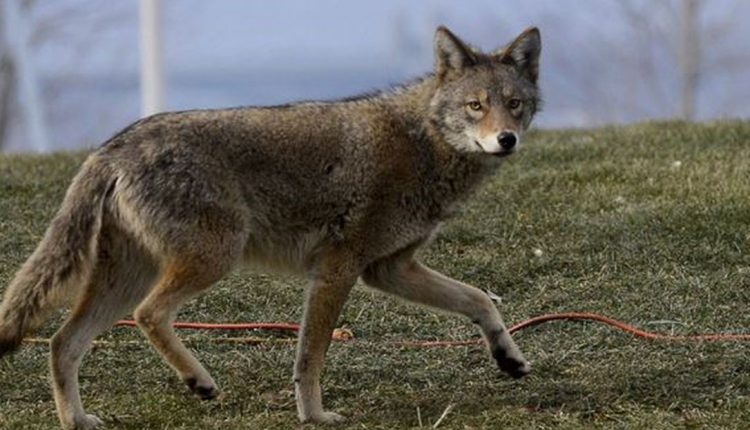 It may not be spring quite yet, but the wily coyote is starting to make appearances.

In a video sent to the Mercury Tribune by south Guelph resident Rob Snyder, eight-year-old Pomeranian Yuki can be seen defending her home turf — from the relative safety of a large deck.

On the morning of March 5, Snyder said there were two coyotes “looking for breakfast” as Yuki yaps from behind a hot tub. One of the coyotes can be seen jumping in the yard, as if inviting the pup to play. It gets second thoughts when Snyder’s wife runs onto the deck with her arms raised.

Another coyote in the nearby bushes wasn’t so easily deterred.

“Eventually I went out there and made a bunch of noise, and it didn’t move. So I went back out with a shovel and beat the ground and it took off,” Snyder said. “Pretty cheeky.”

Scott Green, manager of corporate and community safety for the City of Guelph, said “it’s that time of year” for the animals to start coming out.

Guelph keeps a record of community-reported coyote sightings on its website. So far, only one sighting has been reported there in 2022, near Clair Road West and Gordon Street on Feb. 28. Last year, Green said there were 31 reported sightings, mostly spread out over the city.

“If we’re getting a lot of complaints, and we see a cluster in one spot, we’d send out our property standards guys to have a look, and see if there’s a food source somewhere,” Green said.

Those attractants could be anything from overflowing bird feeders, to waste left outside, to mishandled compost. These can “attract a diverse range of prey species such as rodents, squirrels, chipmunks and insects, which coyotes will utilize as food” says Coyote Watch Canada, a not-for-profit organization.

According to the organization’s website, increases in coyote sightings can be expected during their mating season in January to February, during den selection and pup rearing from March to September, and when family groups disperse in the fall and winter.

“Each canid individual and/or family responds uniquely to seasonal milestones.”

The CWC site also says that Snyder took the right steps when it comes to scaring off the interlopers. Make yourself big and loud, and yell, don’t scream, at the coyotes to leave. Rattling keys, popping an umbrella, or beating a shovel against the ground are also valid options.

Ben Worthington, manager of animal services for the Guelph Humane Society, says his organization doesn’t really deal with wild animals, unless there is a risk of disease. Instead, he says that they’ll reach out to CWC or the Ministry of Natural Resources if there are recurring concerns in an area.

Green encourages people who spot coyotes in the city limits to post their sightings on the webpage so the city can continue to monitor populations and take appropriate steps.

Snyder has lived at the south end of the city his whole life, and said he’s used to seeing coyotes. But he doesn’t remember them being so brazen in the past.

“We’re being more vigilant now. We’ve got a little leash we put (Yuki) on. We basically don’t leave her out on her own anymore. We’ll stand out there with her, or watch from the window,” he said.

“They must have been hungry.”