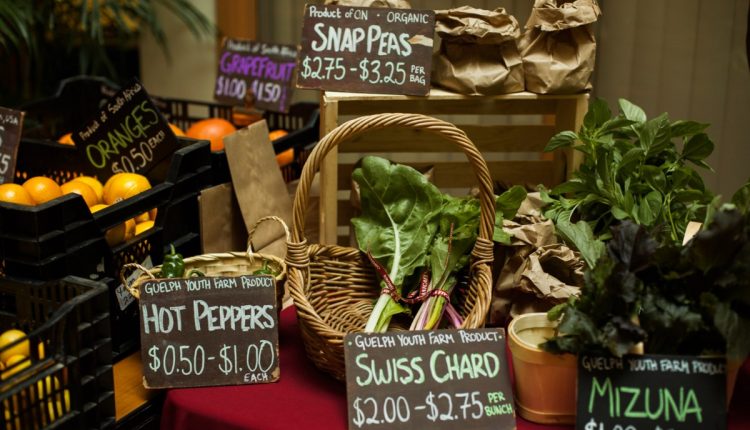 The SEED will be selling produce, baked goods and bulk foods on a pay-what-you-choose sliding scale at the Guelph Farmers’ Market

The Guelph Farmers’ Market is becoming a little more accessible this weekend, thanks to one local organization.

The SEED, a not-for-profit food project that aims to provide the community with access to healthy food, will be selling produce, bulk foods and baked goods at the farmers’ market on a sliding pay-what-you-can scale starting Saturday.

Currently, they only plan on being there every Saturday for the next two months as a pilot project. But if it proves successful, community engagement coordinator Madeline Barber hopes it will become permanent.

Items will be available on a sliding scale, ranging from standard retail prices to 30 to 50 per cent off.

“You pick the price, whatever feels right for you. No questions asked,” she said.

According to farmers market lead Leanne McGray, this is the first time the market will have a vendor with such flexible pricing.

“We wanted to support the goals of The SEED by making affordable and nutritious food accessible to all. As a community, we should all be playing a role in ensuring that everyone has enough to eat,” she said.

“The SEED’s enterprising work in bringing solutions to food insecurity and food access is innovative and is making a difference. We are pleased to have them at the market.”

Prior to the pandemic, the SEED was running pop-up markets in neighborhoods around the city, with the same sliding scale concept, so it’s one they are well acquainted with.

“Fifteen per cent of households can’t access the foods that they need,” Barber said. “So that’s why we’re selling food at a sliding scale, to improve access.”

But they’re also offering flexible prices so that people of all incomes can shop together.

“Food is universal. A part of food health is sharing the same (shopping) space and everyone having access to the same food quality,” she said. “So it’s really important to have dignified, welcoming spaces with high-quality food that people can come to, stigma free. No one has to know where you’re paying on the sliding scale,” she said.

Plus, if you pay full price, it subsidizes the cost for those who can’t.

Produce will be sourced from local distributors, although they will have some non-local items as well, like citrus fruits.

The baked goods will be from their upcycle kitchen, made with ingredients that would otherwise be going to waste.

While they could have continued selling these items at their pop-up markets in various neighborhoods, Barber said they wanted to try operating out of the market because it’s such a great space.

“It’s open to the public, people of various incomes can access it. There’s a lot of foot traffic. So we expect there to be a welcoming environment, and look forward to having conversations with the community,” she said.

McGray added that if other non-profits and charities want to get involved in this way with the Market, she encourages them to reach out.

You can learn more about the SEED and their various projects here.

Guelph’s United Means arms out greater than $100Okay in grants