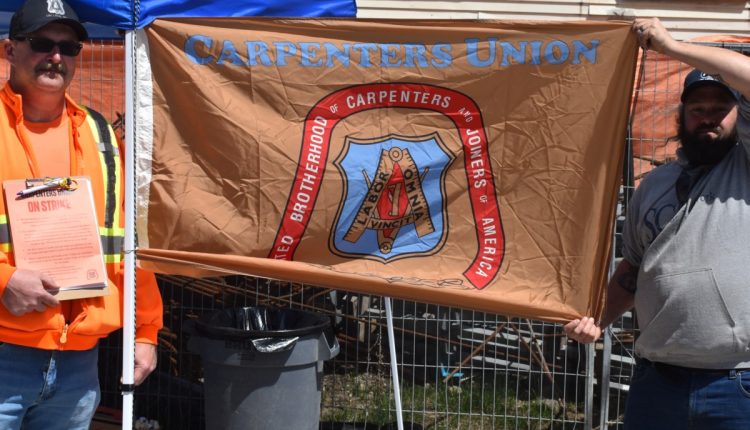 A picket line with a dozen carpenters formed along Wyndham Street South Monday as approximately 15,000 unionized carpenters across Ontario in the industrial, commercial and institutional (ICI) industry walked off the job.

Members of the Ontario chapter of the United Brotherhood of Carpenters and Joiners of America triggered the strike action after rejecting their employer’s latest contract offer.

The union represents roughly 750 of those workers in the Guelph and Cambridge communities.

“We’re here representing local 785 out of Cambridge, and we’re here to show our partners in this negotiation for a collective agreement that we are willing to negotiate but at this point, we need to move forward with strike action. That’s what’s afforded to us through collective bargaining, and we’re hoping we can get closer to what we feel is a living with our partners – the contractors- soon than later,” said Tim McDonald, strike captain for Carpenters Local 785.

The union hasn’t been on strike in the ICI sector for 34 years, with the current strike action’s biggest aim to get members a fair and competitive wage that keeps up with inflation.

The ICI represents the commercial side of construction, such as the building of hospitals, airports and renovating old armouries.

“The ICI is basically our infrastructure, so I’ve done, I think, over the last two years nine of 10 police stations because the provincial police were given a grant and we ended up rebuilding a bunch of police stations and bringing them up to date,” said Chance Darroch, strike captain for the region. “In order to do that you need carpenters to build them from the from work to the finish work.”

The local 785 workers are looking for raises that can combat the staggering inflation rate which has devalued the worker’s wages.

“This negotiation is something I think everyone is feeling in the middle class,” said McDonald. “We see an erosion of the middle class as inflation has just gone crazy, you know, we feel that if we can come to an agreement with our partners that only helps everyone around us.”

Monday’s strike by carpenters in the ICI sector comes just a week after six unions in the residential construction sector began walking off the job last week.

“I’m just a working Joe, here like everybody else today, and I hope our partners in this relationship recognize our value and recognize that we need to take care of our families as well,” said McDonald.