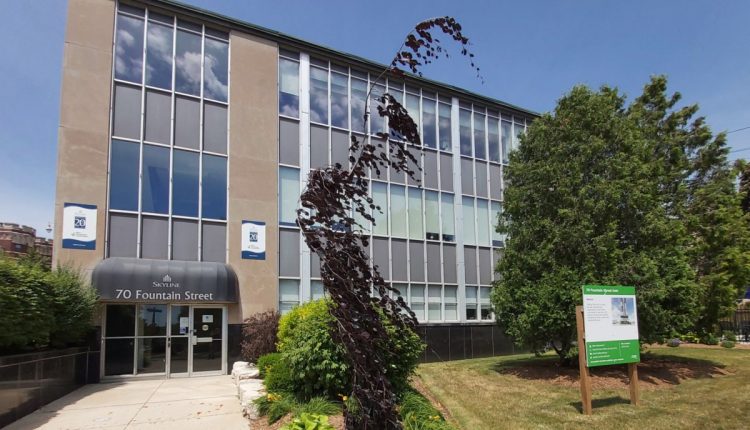 A plan to construct the city’s tallest building has been downsized, but the proposal remains taller than anything else in Guelph.

The fate of a now 19-storey mixed-use building on the edge of downtown, at 70 Fountain St. E. and 75 Farquhar St., rests in the hands of the Ontario Land Tribunal (OLT) following a 14-day appeal hearing.

When council unanimously rejected the proposal in 2020, spurring the OLT appeal, the building was to be 25 storeys tall, with four floors of office and commercial space.

“I have much to review and consider,” commented tribunal member Scott Tousaw at the end of Friday’s virtual hearing, noting he will provide a written decision “in due course.”

If approved as-is, the development from property owner SkyDev Co., the development arm of Guelph-based Skyline, would see the creation of a 19-storey building featuring a four-level podium of commercial and office space, with 15 storeys of residential units above and two levels of unbundled, underground parking below.

The building, explained SkyDev Co. lawyer Eileen Costello, would offer nearly 2,000 sq./m. of office space upon opening, with potential to expand the office space by 5,000 sq./m.

The location is currently zoned for up to six storeys. Official plan and zoning amendments are being sought through the OLT appeal.

Much of the cause for concern at the time of council’s rejection was that the proposed building exceeded even the Basilica of Our Lady Immaculate and it didn’t fit with the character of the existing neighbourhood. There also was, and still is, a desire by city officials to see the property retained as primarily office uses.

Despite the decrease in proposed height, the city continues to object to the redevelopment effort, which would replace an existing three-storey office building which is home to Skyline’s head offices.

“This is not a proposal the tribunal should allow,” argued city lawyer Allison Thornton during the hearing, adding it’s “fundamentally incompatible” with the city’s vision for downtown.

She pointed out the proposal initially includes about 1,000 sq. m. less office space than the existing building offers. With the pending arrival of all-day, two-way GO train service to the city, municipal officials are hoping to attract workers from outlying areas.

“Guelph deserves to be and aspires to be more than a bedroom community,” Thornton said.

Among the arguments put forward by SkyDev are that the primarily residential component of the building would support downtown intensification, there is an inventory (or pending inventory) of available office space downtown already and city documents don’t specifically preclude residential at that location.

There are nearby spots designated for buildings as tall as 18-storeys, Thornton noted.

Costello stated the proposed building doesn’t sit within any of the protected basilica view corridors, the existing building and surrounding area don’t carry designated heritage protections, and while city planning documents indicate taller buildings should be kept to gateways such as the intersection of Wyndham Street and Wellington Road, it doesn’t specifically exclude them from going elsewhere.

“In terms of (setting a) precedence, this is a good one,” Costello told the tribunal, suggesting the city is “the author of its own destiny” with regard to what is and  isn’t specifically stated in official planning documents.

“Our client welcomes the opportunity to work with the city and city staff (to further refine the proposal),” Costello said early in her closing remarks, adding negotiations didn’t begin until the hearing began on Jan. 31.

Marlene Truscott labored to clear her husband’s identify for many years, now a movie premiering in Guelph tells her story