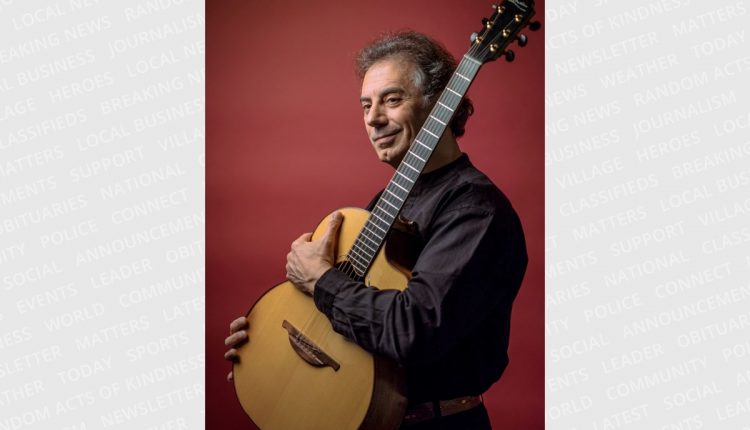 Pierre Bensusan to cease in Guelph throughout his North American tour

NEWS RELEASE
SILENCE SOUNDS
***************************
Pierre Bensusan’s 2020 North American tour was in full swing when the pandemic shut it down, causing him to return home to France. He’s making up for lost time with an extensive North American tour. After releasing Azwan, an album about our oneness and interconnectivity, in the midst of a unifying global crisis, the world-renowned acoustic guitar master, vocalist and composer returns to the US and Canada, completing the second leg of his 2022 North American Tour. In the middle of this route will be a stop in Guelph, where on Thursday evening, Oct. 13, Silence Guelph proudly welcomes him back to their stage for the first time in 5 years.

“Even if I loved staying at my home, near Paris, for two years, playing, writing, taking the time, stopping running, sometimes locked down in Heaven… I felt a real relief to be able to play live again,” Bensusan says. “The first part of my North American tour this spring left me with an immense feeling of gratitude for the public who came to the concerts. There is nothing stronger than getting together around the music played live, especially when many were walking into a concert hall for the first time in two years.”

Bensusan has, throughout his career and a string of recordings confirmed his place as an acoustic visionary who combines sensibility with shadings of ethereal jazz, pop, world music and classical melodies, free and fusion styles. Born in 1957 in French Algeria, Bensusan released his debut album Près de Paris in 1975 at the age of 17. It won Le Grand Prix du Disque at the Montreux Festival in Switzerland (1976). More albums and extensive touring followed, as well as a recording contract with Columbia in the US. and, in more recent years, being elected Best Guitarist of World Music by the readers of Guitar Player Magazine. His triple album Encore won the Grand Prix of the Independent Music Awards in the category of Best Live Album. The guitarist has sold half a million albums and given thousands of concerts around the globe, both solo and through numerous collaborations.

Guitarists from Leo Kottke to Larry Corryel, to Tuck Andress, Tommy Emmanuel, Mark Knopfler, Andrew York, Andy Timmons, to Steve Lukather… have sung his praises, and Steve Vai released three Bensusan albums on his label Favored Nations. And it’s not just guitarists who are so inspired by Pierre’s music, as evidenced by a recent studio collaboration with Donny Osmond on his latest album Start Again.