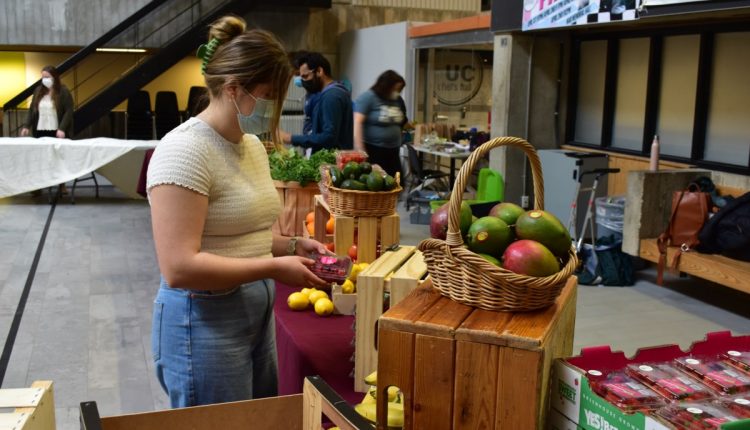 A University of Guelph pilot project is helping combat food insecurity on campus through a partnership with local organizations by providing a sliding price scale for fresh produce.

The Campus Food Market is a weekly pop-up market held in the U of G Student Center and consists of a collaboration between the Feeding 9 Billion initiative at the Arrell Food Institute, the GuelphLab within U of G’s Community Engaged Scholarship Institute, the Office of Sustainability and Hospitality Services with all produce sourced via The SEED.

“We’ve been having meetings off and on during the pandemic to address the need to provide some level of support for students who are food insecure,” said Jeanna Rex, education coordinator for the Arrell Food Institute. “This came out of a Guelph Lab survey done with students in 2019 where it indicated 24 per cent of our students on campus struggle with food insecurity, so even before the pandemic the wheels were turning.”

Of those, 10 per cent have been classified as severely food insecure – meaning the frequent missing of meals.

Two students, Maya Nickle and Vivan Ma, were the driving force behind the market. Both are peer helpers with Feeding 9 Billion initiative, a food security initiative that conducts outreach and education in food, agriculture and global hunger.

The introduction of the sliding pay scale means that those who are facing a greater instance of food insecurity can buy produce for a reduced fee.

“We’ve seen quite a range, we have lots of people who pay in between or either end, so it’s actually a pretty good mix, and that’s what we’re going for,” said Nickle.

The items will have a lower-end price and an upper-end price, with no questions asked as to what a person would like to pay as long as it is between the listed range.

“They’re priced between the average grocery price to 30 to 50 per cent less than store prices, so when a student or customer at the market comes up they’ll see a little placard in front of, let’s say of say lemons, and they’ll be 50 cents to $1.15, so they know when they walk up this is what they can pay between,” said Rex.

The six-week pilot project wraps up April 7, with organizers hoping a fully-structured program can resume ensuring students have access to not only affordable food, but food that is wholesome and healthy.

“We haven’t actually been in conversation with anyone higher in administration on the campus or anything like that, but I know Arrell Food would support it and partners on campus would support it,” said Rex.

They said for now the answer is still in the air, however, she would like to see a U of G initiative that stays on the campus.

Nickle said when she returns for her fourth and final year in the autumn she hopes to bring the market back into full swing, leaving behind a legacy of helping those who are food insecure have access to affordable meals.