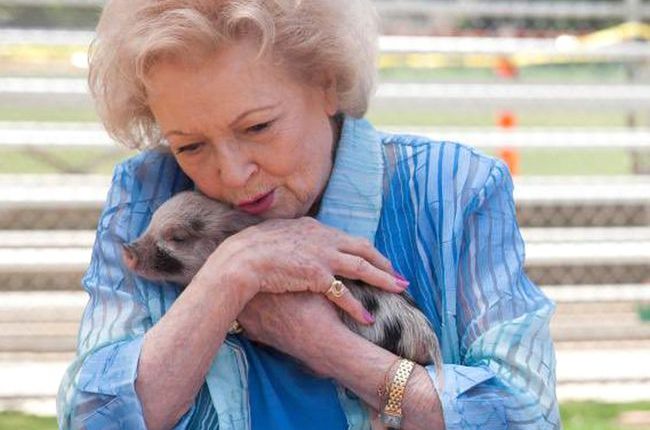 Comic actor Betty White snuggles a piglet. Animal lovers are asking for donations to be made in White’s honour on Jan. 17, which would have been her 100th birthday.

“Golden Girls” sitcom star Betty White died on Dec. 31, 2021 at the age of 99, but her legacy and love for animals is living on in her memory.

Dubbed the Betty White Challenge, fans are honouring the late comedian and animal rights activist by donating $5 to animal rescue organizations and shelters on what would have been her 100th birthday on Jan. 17.

Q: How many donations has the shelter received in Betty White’s memory to date?

A: The Guelph Humane Society has received over 30 donations already in memory of Betty White.

Q: Have there been any special messages shared by those donating?

A: On our online donation form, there is a space for donors to leave a message. We’ve received some really sweet messages so far. One was: “In memory of Betty White. A true animal lover dedicated her time and money to her passion of animal care. RIP Betty White ??”

One of my favourite comments so far was: “Tribute to Betty White. Not waiting til the 17th. Dogs can’t wait for treatment or food so I’m not waiting to donate on this day.”

Q: What has the typical donation amount been?

A: The original #BettyWhiteChallenge suggested making a $5 donation, so we’ve seen a couple of $5 donations come in. The majority of donations have been for $25, but we’ve also seen a few for $50, and even some for $100! Last night, a very generous donor made an anonymous gift of $500 in Betty’s memory. And this morning, two people dropped by our new building to donate $10 in person. So people have been donating amounts that they are comfortable with — and we appreciate each and every donation!

We are coming off of the busy holiday giving season, so January is typically a slower time for donations. It’s unusual for us to see so many larger donations, like $100 and $500, at this time of year. It’s really incredible. And I think Betty would be so flattered and happy to know that her legacy is helping so many animals at a time of the year when people aren’t historically thinking of donating to animals in need.

Q: What will the donations be used to support?

A: All of these donations will go directly towards the animals, providing things like food and veterinary care for vulnerable animals in our community. On our donation form, people can decide to put their donation into specific funds. Most donations go towards “Most Urgent Need,” but there are other funds to choose from, such as the Senior Cat Fund — which helps senior cats specifically — or Duke’s Fund — which helps to fund specialized and expensive veterinary procedures that some animals need, like amputation, eye surgery or costly dental work.

A: The #BettyWhiteChallenge, which we can’t take credit for, is encouraging people to donate $5 to their local animal shelter or rescue in honour of Betty White’s 100th birthday on Jan. 17th. At GHS, we are taking it a step further. We thought it would be really awesome to get 100 new monthly donors in honour of Betty’s 100th birthday. Monthly donors are part of what we call our Super Paws Club, and you can join for as little as $10 a month. Instead of a one-time donation, monthly donors make an even bigger impact because their financial support is being made consistently throughout the year — which allows us to help even more animals in our community.

Q: How can people donate?