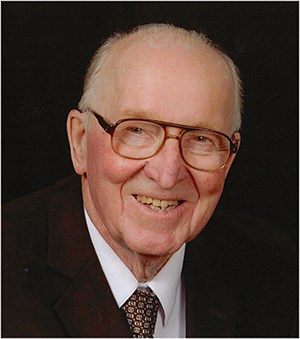 Freeman passed away peacefully at Guelph Wellington Hospice after a challenging battle with cancer, supported to the end by his loving extensive family and many close friends, reflecting of his outreach to so many.

Freeman was a strong, iconic, determined man, true to his PEI roots, a man of numerous accomplishments, yet humble about his many achievements. He graduated first from Macdonald College in 1950, followed by earning MSc and PhD degrees in entomology and plant physiology from the University of Wisconsin. In 1954 his first posting came at Cornell University’s New York State Agriculture Research Station where he rose through the ranks, first to the level professor and then to department head. In 1968 he returned to Canada taking a position as professor of Zoology at the University of Guelph, once again rising through the ranks to become the Dean of the Ontario Agriculture College in 1983. His leadership skills shone in this role as he asserted a lifelong influence over so many undergraduate and graduate students, as well as his peers and colleagues, until his retirement in 1991. He was a prolific researcher as reflected in the more than 200 papers he produced, the chapters he contributed to a number of books and the well recognized timely book he co-authored on the significance of pesticides in the environment. He was also active in several professional societies, serving terms as President of both The Entomology Society of Canada and The Agricultural Institute of Canada. Among the many forms of recognition of his achievements, Freeman was awarded the gold medal of the Entomological Society of Canada as well as an honorary LLD degree from the University of PEI.

Post retirement, Freeman remained very active in various capacities and organizations including as a member of Speedside United Church, chairman of the Presbytery of Waterloo, a director of the Waterloo Community Care Access Centre, President of the Guelph Wellington’s Men’s Club, a member of PROBUS Guelph, a regular at his Friday morning breakfast club and his friendly high stakes “Cookie Bridge” group with its traditional closing of a glass of scotch. All supplemented by a love of golf, nature, cooking, the breeding of horses and life itself. This was a life well lived to the very end, a road map of what it is to be an exceptional human being. A life to be celebrated and remembered through a smile and perhaps a glass of that same scotch.

A celebration of life will be held in Guelph at Reid Hall, the recreation center at the Village by the Arboretum, 33 Village Green Drive, on October 2nd, 2022 at 1:00 pm. Arrangements entrusted to the WALL-CUSTANCE FUNERAL HOME & CHAPEL 519-822-0051 / www.wallcustance.com.

In lieu of flowers for Freeman, the family would appreciate donations to Guelph Wellington Hospice or a charity of your choice.

A tree will be planted in memory of Freeman L. McEwen in the Wall-Custance Memorial Forest.