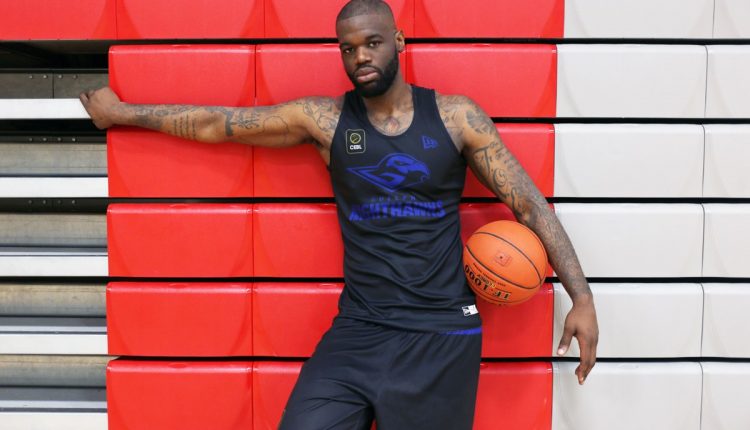 Many ties to NBA Finals-bound Raptors on Guelph Nighthawks

‘It’s a beautiful thing to see a guy I played college basketball with and watch him flourish,’ says Guelph Nighthawks player Chadrack Lufile, who played with Fred VanVleet in college

As the Toronto Raptors become the first Canadian team to ever play in an NBA Finals game on Thursday night, members of the Guelph Nighthawks professional basketball team are watching and reflecting on their own connections to the players who are performing at the highest level.

Current Nighthawks guard Myck Kabongo said the Nighthawks players have been watching the Raptors playoff run as a way to get to know each other and gel as a team off the court.

“We like watching the game together and talking basketball,” said Kabongo. “It’s kind of cool to be so close to history, to say we see the Raptors at the NBA Finals — it kind of sounds crazy, but it’s really happening.”

Kabongo spent the 2018-19 season signed to the Raptors 905 team in the NBA development G-League.

Three of the Toronto Raptors who have been key contributors to the team making the NBA Finals also came through that same program — Pascal Siakam, Fred VanVleet and Norman Powell.

“They have had a lot of success in the last couple of years in developing their players,” said Kabongo. “A lot of the guys in their program have gone through the G League, so it is cool to see them contributing at that high level.”

Kabongo was born in the Congo, but moved to Toronto when he was six. He grew up near Pape and Danforth, swept up in so-called ‘Vinsanity’ when then-Raptor Vince Carter was playing with the team.

He followed the team ever since — during the Chris Bosh era and the rebuilding years, but Kabongo said it was DeMar Derozan who finally made it cool to play in Toronto.

Kabongo went on to play for the University of Texas Longhorns during his college career. Not drafted in the NBA, but has spent four years in the NBA G-League, including last year in Toronto.

“It was kind of surreal to be that close to home and so close to my dream in the NBA,” he said.

Playing on the Nighthawks is allowing Kabongo a chance to continue working on his game over the summer, while the development league is in the off season.

“This is perfect for me,” said Kabongo.

Head coach Tarry Upshaw said Canadian basketball has changed a lot in the 20 years since Vinsanity. Canada is now known as country that is producing top talent.

“It’s a completely different game than it was 20 years ago when your gym teacher did a good job getting the boys ready and once the season was done they were playing soccer or rugby and that was it,” said Upshaw. “You can get a little bit of a taste of the pro game if you come here and check us out. There’s guys who have played all over the world here.”

Upshaw said most people are priced out of tickets for the NBA finals.

“Right now, to get a ticket to a Raptors game — unless you’re willing to drop $1,000 — I don’t think anyone is getting a ticket. I think Jurassic Park would be an unbelievable experience, but if you’re over 40 or 50, do you want to stand outside for three and a half hours and jump up and down?” he said. “For a family — especially here in Guelph — you can come to our games and it’s very affordable. Instead of dinner and a movie, do dinner and a basketball game.”

“The best thing is, by the time our games are over you can be home and watch the (Raptors) game too — so you get the best of both worlds.”

Chadrack Lufile is the oldest of three brothers who all play together on the Nighthawks. He grew up in Burlington and went on to play at Wichita State in college.

Playing power forward, Lufile was teammates with VanVleet when Wichita made it to the NCAA Final Four after an unbeaten 2013 regular season. He was twice featured on a Sports Illustrated cover during that run with Vanvleet.

“We would have been the champions. Unfortunately things didn’t work out the way they were supposed to, but my journey has been absolutely amazing, it has moulded me into a better player and a more mature person,” said Lufile.

“It’s a beautiful thing to see a guy I played college basketball with and watch him flourish,” said Lufile of watching VanVleet play at the highest level, making it to the NBA Finals.

Lufile’s own NBA dreams were sidelined when he tore a major ligament in his knee after being drafted into the NBA G-League. After surgery and years of hard work, Lufile said he has come out the other side stronger and as a better player.

“God gave me a second chance,” said Lufile. “A lot of guys tear their ACL, especially big guys, they don’t come back from that.”

Lufile believes his NBA dream is still achievable and watching his friend and former teammate make it to the NBA Finals is fueling his determination.

“He wasn’t drafted — they gave him a chance and he took it,” Lufile said of VanVleet. “He didn’t complain and he bet on himself. That’s his brand right now, ‘bet on yourself.’ He’s going hard, he’s taking big shots and he isn’t scared. There are a lot of guys in his position that wouldn’t even take those shots. You can tell he has ice in his veins.”

“Everything he has now he earned. That motivates me,” he added. “I am still fighting. I still believe I can play in the NBA — I just have to be in the right situation at the right time and work.”

Lufile said he and his Nighthawks teammates are making a playoff push of their own. The team currently has a 2-2 record, but so far no other team in the CEBL has a better record than 3-1.

“I feel like we are a championship team, we just have to lock in and do things the right way, especially on defence,’ said Lufile. “I feel like when we do that we are unstoppable.”

The Nighthawks play the Niagara River Lions at the Sleeman Centre on Saturday at 7 p.m.