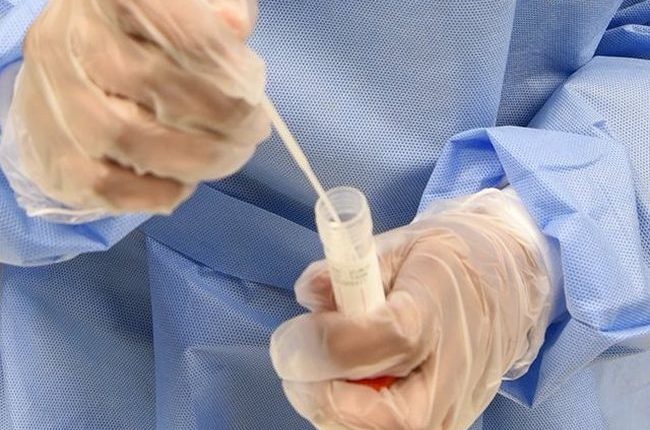 The newest variant of COVID-19 continues to spread throughout Guelph, and will likely mean a very different holiday season.

Dr. Matthew Tenenbaum, associate medical officer of health for Wellington-Dufferin-Guelph Public Health, said the story being written here is similar to what is being seen across Ontario, with Omicron cases continuing to mount.

“The kind of rates we are seeing right now are the kinds of rates you saw in previous waves – we haven’t seen numbers like this since the third wave,” he said.

The rate of new cases locally has more than tripled since the beginning of the month, going from approximately 12 to nearly 40 by Dec. 15. This is also reflected in test positivity rates, with one part of Guelph – forward sortation area N1C – seeing a positivity rate of 11.25 per cent – among the highest in the province.

Tenenbaum noted there is a “significant cluster” of Omicron cases in Guelph, leading to hundreds of contacts of known cases currently having to isolate.

“We’re seeing (Omicron) count for more and more of our cases and, looking at some of the data from the lab, we know that it’s actually becoming our dominant variant,” he said.

“It may well be dominant right now, and I expect it will be causing all or almost all cases of COVID in our community and in Ontario by the end of this month.”

The age group feeling the brunt of this new wave are among the region’s youngest residents, with the rate of new cases among those aged 19 and under approximately five times higher in mid-December than they were at the beginning of the month.

This has rippled out into other age groups as well, with those in their 40s and 50s seeing rates of new cases several times higher than Dec. 1.

Tenenbaum said this can be attributed to COVID-19 spreading at home.

“We certainly are seeing a lot of household transmission, and a lot of these adult cases are parents of these children,” he said, adding transmission has “been going in both directions,” with parents catching COVID-19 from their kids and vice versa.

And as the virus spreads among more members of the same household, the virus is better able to transmit to other social circles – a problem exacerbated by Omicron’s high transmissibility.

“We see that several of these events might have happened by the time that we are actually able to do the contact tracing and we are playing catch up in some cases because of how quickly this virus moves,” Tenenbaum said.

“It does appear to be moving quicker than Delta did, and that was already felt quicker than Alpha and other variants.”

Ready for the holidays

With the holidays right around the corner, what does that look like? After all, the emergence of Omicron has resulted in what many were expecting to be a quieter holiday season to be closer to last year, when Ontario was amidst the pandemic’s second wave.

Tenenbaum said it’s really important that residents follow some of those same lessons from 2020.

“First off, keeping things small. This is not the time to have your massive family gatherings or friend gatherings, bringing in everyone from out of town to have a big get together,” he said.

“We are really saying think about those people, those family and friends who are most important to you, bring them together, but try to keep it as small as you can.”

Another important step is to ensure you are vaccinated and, if able, get a booster.

“That is going to add an extra layer of safety. Even if the current vaccines aren’t perfect when it comes to Omicron, they still offer substantial protection, and having two doses is better than one dose, and one dose better than zero doses.”

While he did not have specifics, Tenenbaum said with booster eligibility now applying to anyone aged 18 and up, providing they are at least three months past their second shot, Public Health will be working to ramp up vaccination capacity. This will take the form of expanding capacity at the health unit’s own clinics, along with ensuring pharmacies and doctor’s offices are getting as many people vaccinated as they can.

With this being the second holiday season under COVID-19, and most residents already vaccinated, Tenenbaum said he understands there is a fair amount of fatigue.

“I think many people feel like we’re going backwards and going back to where we were during wave one or wave two, before we had vaccines,” he said.

STORY BEHIND THE STORY

With the Omicron variant coming, and quickly dominating, the COVID-19 pandemic in Guelph, the Mercury Tribune wanted to look at how it is spreading and what it means for the upcoming holiday season.