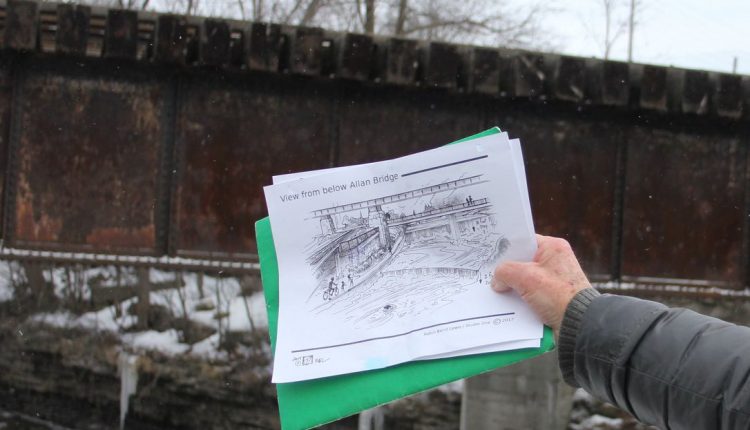 Guelph Coalition for Active Transportation president Mike Darmon holds up a rendering of the underpass the coalition would like to see constructed at the site where he stands. Open to the river, the underpass would allow trail users to cross the Guelph Jun

As the city moves forward with plans to build a pedestrian bridge connecting the Ward to downtown Guelph, local active transportation advocates would like the city to consider another project that has potential not only to improve safety for trail users, but also to boost tourism to Guelph.

“There’s a lot of bike tourism happening right now,” said Mike Darmon, president of the Guelph Coalition for Active Transportation. “Any city that actually improves their infrastructure so that it’s enjoyable … you want to go there and visit it.”

The coalition, supported by the Guelph Hiking Trail Club and the Guelph Cycling Club, is proposing construction of an underpass that would connect city trails along the river with an extension of the Trans Canada Trail that ends just north of Macdonell Street.

It’s a project that would improve trail connectivity in the area, making it easier for pedestrians and cyclists to navigate an intersection that includes multiple sets of train tracks, bridges, and several lanes of car traffic.

“I just see close calls all the time,” said Darmon, explaining that pedestrians often skip using the signalled crossing, jaywalking through traffic to avoid going out of their way.

But an underpass in this area can’t happen unless the city takes it into account as it plans for other infrastructure projects in the area.

The first of these is the pedestrian bridge that will cross the river parallel to the Guelph Junction Railway tracks.

City project engineer Steven Di Pietro said construction of the bridge, which is expected to improve pedestrian safety in the area, will begin this spring or summer.

“The city is currently working on the final requirements for permits,” Di Pietro said in an email to the Mercury Tribune.

Darmon would like to see the city press pause to examine whether changes could be made to the project to incorporate the underpass.

Di Pietro did not say whether this might be a possibility, but said only that the underpass proposal “is not a council-approved capital project and is not identified in the city’s long-term capital plan.”

The pedestrian bridge is just one piece of the puzzle. Other projects that would impact the underpass include the replacement of the Macdonell Street bridge and a dam that creates a small waterfall just below the bridge.

“The key is, because all of it needs to be changed, if you look at the bigger vision for the thing, then it’s an opportunity to do something really spectacular,” said Darmon, explaining the project is being proposed to celebrate Guelph’s bicentennial in 2027.

The waterfall could be moved to a place where it’s more visible, making for a more attractive landscape, he said.

Because of the low height of the Macdonell bridge, moving the waterfall might be necessary in order to allow for the underpass, Darmon said.

“The only other way to do it is actually to dredge the river,” he said.

He acknowledged such a plan might not get the approval of the Grand River Conservation Authority, but he believes it’s worth exploring the possibility.

One Guelph resident wonders if it might be possible to scrap the dam altogether.

“Most of these dams and bridges were built for a purpose,” said David Penny in an email to Guelph Hiking Trail Club president John Fisher criticizing the waterfall portion of the proposed project.

Penny, who works installing culverts that allow fish to pass over small dams, said the dams no longer serve the purposes for which they were built — such as powering mills — and instead create obstructions for fish.

Fisher responded that the club was not necessarily supporting a waterfall, but is supporting creating a parkway along the river that would avoid crossing over Macdonell.

He noted also the importance of the city considering the projects collectively to realize a better vision for the area.

Di Pietro said an environmental assessment study has been initiated for improvements to the Macdonell bridge and adjacent dam.

“The objective of the project is to improve pedestrian, cyclist and vehicular movement through the area and to support the downtown area’s community building goals,” he said.

The city’s consultant will explore and suggest various options for the project, then community members will have the opportunity to provide input, but the timing for that is 2023, he said.

STORY BEHIND THE STORY: GCAT president Mike Darmon reached out to the Mercury Tribune to share the vision for a Guelph bicentennial project that would improve trail connectivity in the city and change the riverscape in the downtown. The Mercury Tribune wanted to learn more about what the project would require and what it might mean for the city.