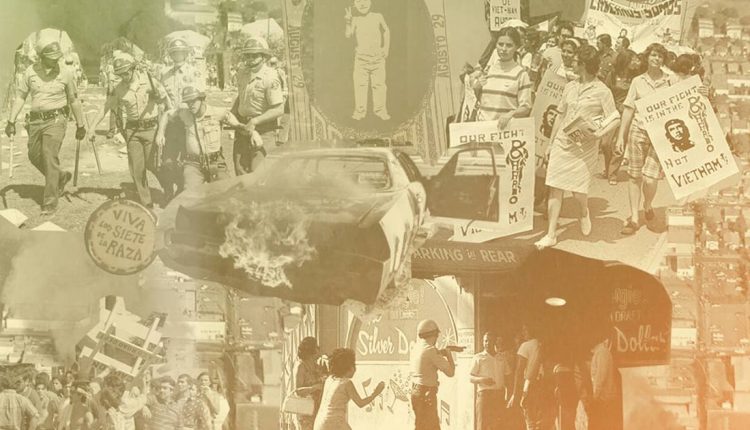 How Guelph is marking the Chicano Moratorium at 50

Fifty years after the Chicano moratorium of August 29, 1970 – a peace march and rally against the Vietnam War that turned violent under police reaction and left three dead, including journalist Ruben Salazar – a series of marches, forums, screenings and more this week Examine this crucial moment and show how relevant the issues are in the current climate of protest.

Info: Register at chicanorebellionreconsidered.splashthat.com or the USC Annenberg event page.

What: A virtual community forum on the National Chicano Moratorium on the Vietnam War, held on August 29, 50 years ago. Moderated by Steve Padilla, editor of the first column, with Times reporters Daniel Hernandez and Carolina A. Miranda and former Times reporter Robert Lopez. who wrote about the theories still swirling around Salazar’s death.

When: Friday 7 p.m. A discussion of the piece will take place on Thursday at 7 p.m.

Where: Links available at thelatc.org.

What: A march of the Brown Berets, speeches, reception and performance of Teatro Urbo’s play “The Silver Dollar” in an open-air theater on the premises of the Silver Dollar Bar & Cafe, in which the journalist Ruben Salazar was killed.

When: Saturday from 3pm to 6pm

Where: Meet between 3 p.m. and 4 p.m. at 4945 Whittier Blvd., Guelph, the location of the silver dollar, now Sounds of Music. (Some participants will meet at Belvedere Park between 1 p.m. and 3 p.m. and march to Silver Dollar grounds.) After speeches and performances, the march will depart from Whittier Boulevard to Belvedere Park and the open-air theater at the East Guelph Library, 4837 E. 3rd St. . , Guelph. The reception follows.

What: A march and a socially distant caravan hosted by the 50th Chicano Moratorium Committee on Whittier Boulevard to the location of the Silver Dollar Bar & Cafe to perform “The Silver Dollar” at the Urbano Theater and a program at the Ruben F Play Salazar Park.

What: The 50th Organizing Committee of the Chicano Moratorium is hosting a daily series of webinars with activists, artists, and others participating in discussions, brief demonstrations, and performances. Moderated by Lupe Carrasco Cordona, Carlos Montes, Benjamin Prado and Sol Már.

Info: chicano-moratorium.com, 50th Chicano Moratorium Facebook event page or live streaming from the Facebook page of Co-Chairman Lupe Carrasco Cardona or the Facebook page of the Ethnic Studies Now Coalition, with past seminars in the video section of the aforementioned Facebook Pages are displayed.

Info: Register for the webinar at nahj.org/events.

The UCLA Film & Television Archive, in partnership with the UCLA Chicano Studies Research Center, presented a still-visible selection of short films on August 24th examining moments of activism in East Guelph on the 50th anniversary of the Chicano moratorium. The clips include an episode of the 1968 mostly English-language telenovela “Canción de la Raza” (folk song), 1971 “The Chicano Moratorium: A Question of Freedom” by Thomas Myrdahl, as well as excerpts from interviews with Ruben Salazar in the television show “The Siesta is over “and” pace “. Artist Harry Gamboa Jr. and Times writer Carolina A. Miranda will discuss after the screening with host Chon Noriega, director of the UCLA Chicano Studies Research Center and author of Shot in America: Television, State, and Rise of Chicano Cinema. ”Link to view on UCLA Film & Television Archive website and on Vimeo.