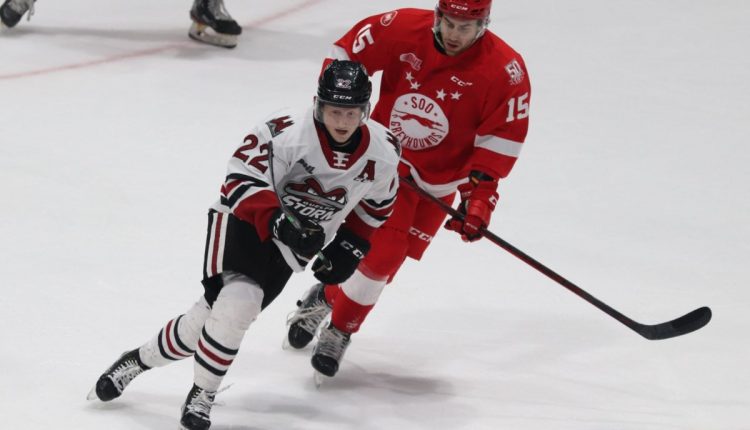 SAULT STE. MARIE – There was a lot to like for the Soo Greyhounds

Not only did a 6-0 win end their Ontario Hockey League Western Conference quarter-final series with the Guelph Storm, the win also continued some positives for the Greyhounds in what was a solid opening round playoff series for the club.

“It was workmanlike,” said Greyhounds coach John Dean of the win, which gave the team a 4-1 series victory in the process. “The guys went out there with purpose and had a job to do. They were concerned about the team over the individual tonight, and it paid dividends over the course of 60 minutes. It’s a good, complete effort by our group.”

The Greyhounds opened the scoring in the game with a pair of goals in the first period to put the Storm behind early.

“Every playoff game, coming out strong is important and scoring the first goal is big,” added overage forward Tye Kartye, who had a pair of early goals for the Greyhounds in the win.

For the Storm, the series with the Greyhounds provided a learning experience for a young Guelph team, including in Saturday’s loss.

“They come in waves, and they score in bunches,” associate coach Chad Wiseman said. “We competed well, and our work ethic was strong. To the last buzzer, there was no quit, even when it was 6-0. I couldn’t be more proud of the group. It’s an experience for them. We’re a young team and unfortunately, it’s part of the process is learning from that and what they do really well and putting that into our future and being able to adapt and change and grow as a group.”

After discipline was a factor for the team earlier in the series, Dean expressed pleasure when asked about the Greyhounds discipline in game five.

“We have an emotional group,” Dean said. “I’m an emotional coach and unfortunately sometimes the players feed off of that in the wrong way. Today, it was clear that they understood the mistakes of game four and they weren’t going to let that happen again. I really enjoyed the discipline after the whistle. The refs did a great job too. They manage it. They were very vocal, and our guys need that.”

Dean was pleased with the defensive effort of his team throughout the series picking up a pair of shutouts and surrendering just six goals in their four wins in the series.

“Our guys are doing a really good job of protecting inside the dots, blocking shots when they need to and boxing out in front of our goaltender,” Dean said. “Our defensemen had an unbelievable series. Their commitment to both sides of the puck was pretty incredible.”

Wiseman said the goals showed the young group in Guelph the importance of details.

“Those are the little details that a young group unfortunately doesn’t understand, like the importance of winning a faceoff or not losing a faceoff clean, getting out in shooting lanes,” Wiseman said. “Those are tough goals to give up.”

Kartye opened the scoring for the Greyhounds just under nine minutes in when he beat Storm starter Jacob Oster from the top of the right circle after taking a pass on a clean faceoff win by Bryce McConnell-Barker.

Kartye then made it 2-0 at 13:11 off another faceoff win by McConnell-Barker. Kartye took the pass and beat Oster from the right circle high stick side.

“Those are huge,” Dean said of the opening-period goals. “We were doing a good job of limiting opportunities against, but the game was vanilla. It’s not like we were dominating the game by any means. Then Tye (scores) off faceoff wins by Bryce and you could see our team say ‘OK, this is what we’re going to do today. We’re going to limit their opportunities and take the opportunities that we get and play it in stride.”

Oster made 28 saves for the Storm.

With the series win, the Greyhounds now await the results of the remaining Western Conference quarter-final series that are still in action to determine their opponent for round two.

After the melee in game four in Guelph, both teams were without key players due to suspensions for Saturday’s game.

The Greyhounds played the game minus goaltender Tucker Tynan, who was suspended three games after receiving a match penalty for intent to injury after taking a swing at Storm forward Sasha Pastujov.

Pastujov was handed a two-game ban for a charging major in the game after running into Tynan earlier in the play.

Guelph forward Danny Zhilkin was suspended for two games for coming off the bench during the melee and Storm coach George Burnett was also suspended two games for Zhilkin leaving the bench.