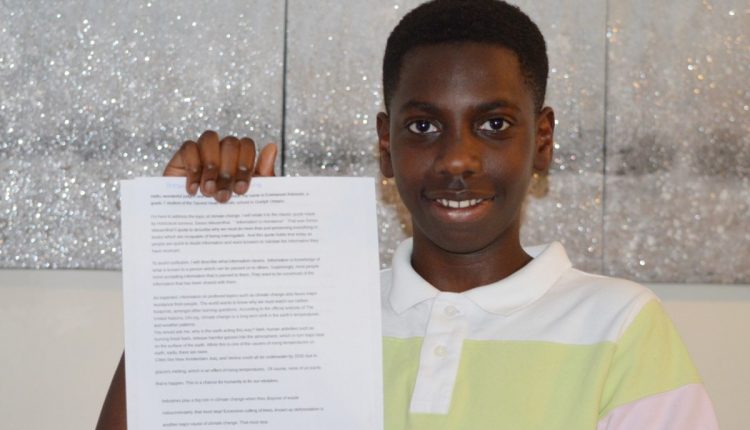 Local Grade 7 student Emmanuel Adewale’s thoughts on climate change have earned him a spot in the finals of a national speech competition.

The finals of Speaker’s Idol are being held Wednesday through a virtual stream.

Adewale’s speech talks about the impacts of climate change and he said he wants people to be more aware of what is happening to the planet.

“I feel like a lot of people don’t understand the right causes and impacts of climate change. So I thought if I spread this information to people maybe they will start a chain reaction with people to do better in our community,” said Adewale, who attends Sacred Heart Catholic School.

He said he first started learning about climate change when he was in Grade 4, where he learned about the environment. He said in the future he wants to either work in science or the medical field and he is interested in exploration and finding new things.

Adewale said the main message he wants to convey in his speech is for people to understand the effects of climate change. He gave an example of deforestation, with less trees means less oxygen and more heat being trapped in the earth’s atmosphere.

He has already made it past two rounds to get to the finals of the competition, which is hosted by Friends of Simon Wiesenthal Center.

The competition began with 254 students across Canada. He then moved onto the next round where he recited his speech on a live stream. He had three tries to nail his speech and he said he was happy with his second attempt.

From there he was selected to move onto the finals on Wednesday, where winners will be announced.

“I would say to the other students you have a voice, use it. Your voice is not some sort of barrier, it’s actually a gift. Your voice can sometimes be very powerful,” said Adewale.

“So just keep on doing what you’re doing and pursue climate change.”

Here is Adewale’s speech in its entirety:

Hello, wonderful judges and listening audience, my name is Emmanuel Adewale, a Grade 7 student of the Sacred Heart Catholic School in Guelph, Ontario.

I’m here to address the topic of climate change. I will relate it to the classic quote made by Holocaust survivor, Simon Wiesenthal, “Information is resistance”. That was Simon Wiesenthal’s quote to describe why we must do more than just preserving everything in books which are incapable of being interrogated and this quote holds true today as people are quick to doubt information they have received.

To avoid confusion, I will describe what information means. Information is knowledge of what is known to a person which can be passed on to others. Surprisingly, most people resist accepting information that is passed to them. They want to be convinced of the information that has been shared with them.

As expected, information on profound topics such as climate change also faces major resistance from people. The world wants to know why we must watch our carbon footprints, amongst other burning questions. According to the official website of the United Nations, UN.org, climate change is a long-term shift in the earth’s temperatures on earth, sadly, there are more.

Cities like New Amsterdam, Iraq, and Venice could all be underwater by 2030 due to glaciers melting, which is an effect of rising temperatures. Of course, none of us want that to happen. This is a chance for humanity to fix our mistakes.

Industries play a big role in climate change when they dispose of waste indiscriminately, they must stop! Excessive cutting of trees, known as deforestation is another major cause of climate change. That must stop.

One thing is now clear to us. It is not just enough to have all this information because as we now understand, “information is resistance”. We must create avenues for people not only to have information about climate change or global warming if you choose to call it that, but to get answers to their burning questions.

Nowadays, that things are done virtually even gives a better avenue to reach more audience. The use of social media, virtual meetings, and conferences are all useful ways to share information on climate, and we are the last generation that can do something about it.

As temperatures rise and glaciers melt we have a right to resist but also have a responsibility to make a change, you can be stuck in the past but never ever forget about the future.