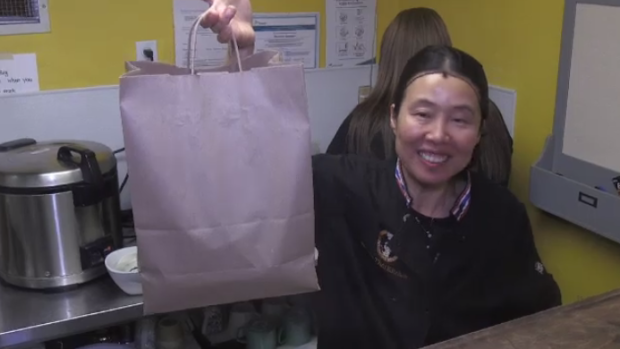 GUELPH —
A Thai restaurant in Guelph is increasing the price of its food by 5% plus HST, in an attempt to cut down on waste.

“Everyday we use plastics, it’s just too much,” says Narumon Verspheen, the owner of Na Ha Thai’s Kitchen on York Road.

The family-owned business plans to replace plastic bags, forks and spoons for more eco-friendly options such as paper bags and compostable utensils by the end of January. It is also trying to eliminate styrofoam use by mid-2020.

“They will be happy to pay a little bit extra, it’s not just for us, but for the community and the environment,” says Verspheen.

The restaurant posted on social media about its decision to increase the price and was met with overwhelming support.

“So happy to pay this extra money to supporting your amazing business,” said one comment on Facebook. Another wrote: “This sounds great! I hope all Guelph restaurants follow suit.”

Many commenters also said they loved how the restaurant is allowing customers to bring in their own takeout containers.

Verspheen said the decision to go green was not customer driven, but to set an example for the next generation.

“If we can do it, little by little… and let them see… they might absorb that and they too will go green.”

It’s an initiative that’s also earned the admiration of her daughter.

“Not all good things come easy… I hope this one little act gets other restaurants to follow,” says Nahathai Verspagen.

Though the price increase might not cover all the costs, Verspheen says, it’s worth it.

Guelph pilot fears for all times after arrest for drug smuggling