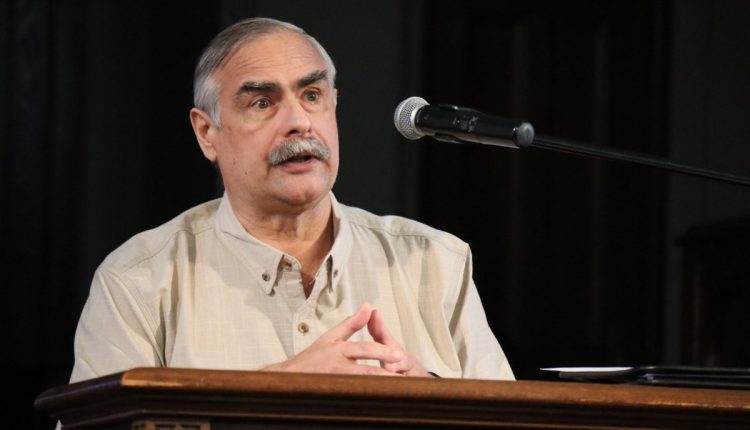 Darin Wybenga, traditional knowledge and land coordinator for the Mississaugas of the Credit First Nation shared his knowledge of Indigenous history in Guelph

Guelph residents got a dose of Indigenous history about the land they live on Saturday.

Guelph is bound to Treaty 3, also known as the Between the Lakes Treaty of 1784.

Treaties were memorialized with Wampum belts. These are beaded belts, one of them is called a friendship belt signifying friendship between Indigenous people and settlers who share the land.

“All together the Mississaugas of the Credit have eight treaties with the Crown,” said Wybenga.

“This is why you live on the land you live on because title came from the First Nations negotiating with the British Crown.

“I hesitate to use the word ownership when it comes to land,” he said.

In the 18th century First Nations people didn’t have a concept of what land ownership was.

“We belong to the land. It’s not a matter of ownership. We occupy it, we exercise stewardship over it. We share the land.”

At the end of the talk audience members were invited to ask questions.

“I find the way you speak is a lot lighter in tone than I would like to hear. From what I’ve read of Canadian history and American history there’s nothing but nasty stuff and manipulation from our governments,” said a member of the audience.

“We are so ignorant about what the native community suffers that we have no way of knowing how to help,” she continued. “I mean a protest in my way of thinking is stupid, is a waste of time.”

“There’s frustration all around but like I said we have to get together and talk to each other about it,” responded Wybenga. “I can yell and pound the table about residential schools. I can pound at the table that I’m subjected to the Indian Act. I can pound the table for all sorts of things but that won’t progress anything.”

Guelph incubator Bioenterprise will get $2M to gasoline inexperienced agri-tech