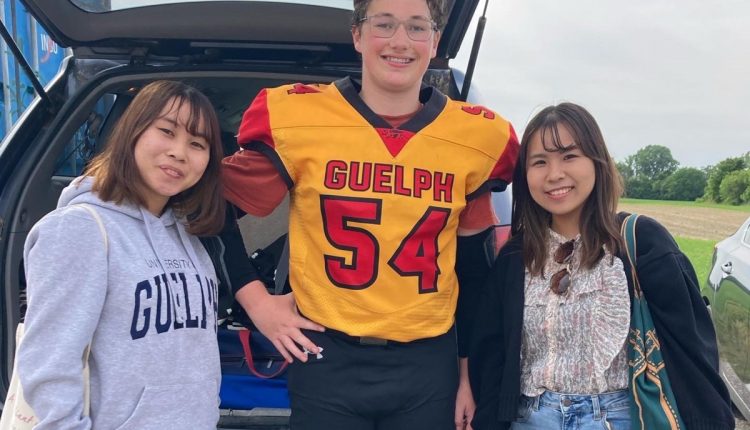 For many people, opening their home to a complete stranger, and one from a different country at that, would be nerve-wracking, to say the least.

But for people like Guelph resident Joanna Parker, the experience is not only rewarding, but has become an essential part of raising her children.

Parker has always been enamored with travel and learning about other cultures, so when she learned how much her friend loved hosting international students, she decided to give it a try.

Since 2015, she has hosted at least a dozen Japanese students through the Canada Homestay Network, which has been operating in Guelph since 2004.

The program facilitates host stays for both high school and university students from more than 70 countries. Currently, the non-profit program has around 150 hosts in Guelph – a number much smaller than usual due to the pandemic, according to host ambassador Cheryl Misener.

For international university students, going through a program like this rather than just renting a room somewhere allows them to get “the full experience of what it’s like to be a Canadian, to live as a Canadian family,” Misener said. “It helps them get integrated into the community a little easier, and helps them practice their English.”

For Parker, though, it’s also an important developmental experience for her kids.

“It really opens my kids up to different cultures, different people, and also (teaches them) patience and how to communicate,” she said.

Although she was excited to open her home up, she was still nervous leading up to the arrival of her first student, Natsumi Kajihara.

“We had two young kids, they were five and six. I had no idea what to expect other than stories from this friend who had told me about it,” she said. But they ended up having a great first experience, and after that, they were hooked.”

The family was sad to see her go, but they still keep in touch, as they do with many of the students who pass through their home. One student even came back to visit them later on.

Their current student, Manami Fujii, is staying with them for four months, leaving in August.

“That will be a sad one. She’s amazing.”

When Parker was struggling to find enough volunteers to work the concession stand at her son’s youth league games, Fujii not only volunteered, but recruited other international students as well.

“Her student has actually organized a whole bunch of other Japanese students to volunteer to work at the concession stand for these games. So it’s giving them this awesome opportunity to get involved in the community in a way they probably wouldn’t if they (weren’t in the program),” Misener said.

It’s a chance to practice their English even more, learn about football and meet other people in the community.

“This is the beauty of Homestay, you get involved in this in the community in a way you never would if you were just renting a room somewhere.”

Now, Parker plans to use this as an ongoing opportunity for international students.

Just like Parker was inspired by her friend, her own 80-year-old mother saw how much they enjoyed the experience and wanted to get involved, too.

The students, many of whom learned to cook during their time in the South Korean military, will cook her food, and watch shows with her.

“She likes to watch American Ninja Warrior and America’s Got Talent. Every week they’ll sit and watch (these shows), and then they’ll have to fill them in when they leave to tell them who won. It’s very sweet.”

Margaret Strybosch is another host who became hooked after her first time. Since moving to Guelph in 2013, she’s hosted five students.

“The first one, we got cornered into,” she laughed. The student was a family friend, and her mother had mentioned she had a daughter who she could stay with.

“I was a little irritated with my mother, but when she came, we loved the experience. We thought it was the best thing we ever did,” she said.

She already had a full household before hosting, with four children, but insists that the more people you have in your home, the better.

“The more people you have in your home, the more diversity of opinion, diversity of experiences,” she said. “It’s nice to be able to influence each other.”

Plus, she said, “When you do things, seeing Canada through their eyes, it really makes you appreciate the country.”

Parker wants people to know that if they are considering hosting but are nervous, or feel like they’re too busy, that the students will just fit into your life.

“They’re at university a lot, or they have a lot of studying to do. So they take up as much time as you want to put into it. But it’s the opposite of a burden. It’s a joy to have them. I think people will be surprised at how enjoyable it is to have students come and be part of their families.”