Hundreds of new residential units could be given the green light by council at its penultimate planning meeting this term.

Scheduled for July 11, city council is due to vote on the fate of two east end development proposals, along with a third downtown.

Here is a look at the developments being voted on, and what city staff are recommending.

The July 11 council planning meeting begins at 6:30 pm, and will be livestreamed at guelph.ca/live.

Written submissions can be sent to the clerk’s office, also by the July 8 deadline.

Exquisite Developments is proposing to build 30 cluster townhouses and a five-storey, 40-unit apartment building at 78 and 82 Eastview Rd. | City of Guelph image

Heading over to the east end of Guelph, council will also be voting on the fate of an Eastview development pitch first made public more than three years ago — and city staff say its latest iteration is not up to par.

In a report to council for the July 11 meeting, city staff are recommending the Eastview proposal should be rejected, noting “the applicant has been unable to demonstrate that the proposed cluster townhouse and apartment infill development will have no negative impact on the adjacent natural heritage system — specifically the Guelph Northeast Provincially Significant Wetland.

“Further, in all submissions, the applicant has been unable to demonstrate whether sufficient services are or can be made available for the development, specifically stormwater management.”

When the plans from Oakville-based Exquisite Developments first came to light in May 2019, the developer was looking to build 57 cluster townhouses at 78 and 82 Eastview Rd., just west of the intersection with Starwood Drive.

When the proposal was the subject of a public meeting in June 2019, a number of neighboring residents said the project, it should be approved, would exacerbate existing issues in the neighborhood, including access to parking and increased vehicular traffic.

“Nobody wants a roadway out front of their house and behind their house,” Christine Phillips, who lives in a neighboring townhouse development, said at the time.

“You know what traffic is like nowadays — people play their cars like the boom boxes, and they screech their tires, and they get mad at each other and take off at extraordinary speeds, and we’re going to have an intersection right behind our property.”

Concerns were also raised about the wetland and woodland on the property, with one resident submitting a petition from local residents calling for the development to be reconsidered “due to profound negative effects to wetlands and animal habitat, tree canopy, parking, water infiltration and density of site.”

However, changes would be made to the project in late 2020, with the developer instead looking to build 30 cluster townhouses and a five-storey, 40-unit apartment building.

The changes were sufficient enough to require a second public meeting in February 2021, with residents raising many of the same concerns they had in 2019.

Minor site plan revisions were filed at the end of 2021.

The fourth tower in the Metalworks condominium development, council is set to vote on Fusion Home’s proposal for a 14-storey, 194-unit building at 93 Arthur St. The building, primarily comprising of two-bedroom units, would also feature two commercial units on the ground floor.

When the project was last in front of council in July 2021, several councillors raised concerns around the number of parking spots proposed for the site, with Fusion proposing 127 on the property itself and another 68 across the road, 12 of which would be for visitors and retail.

“When we have a proponent that says, ‘We can’t make it fit,’ to me that’s a red flag that maybe we’re trying to do too much on the site, and there’s a reason it doesn’t fit,” count Leanne Caron said at the time, adding it is not council’s role to ensure the developer gets a better return on their investment.

“Our job is to look at what fits into the neighborhood, what fits on the site and what the public benefit is.”

This past March, Fusion made a number of revisions to its proposal, including the addition of more parking spots so that each unit would have one. 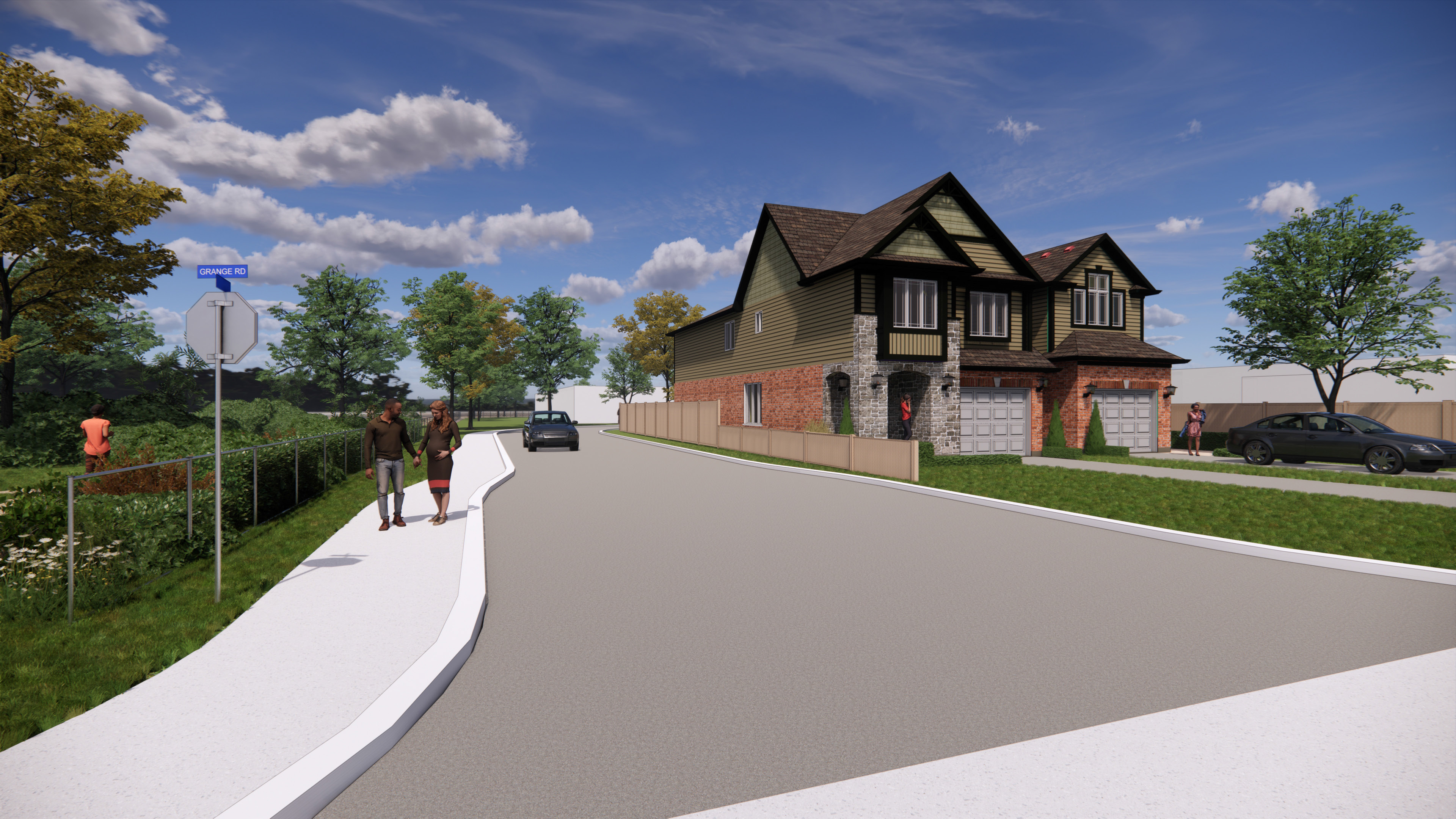 Heading back to the east end of Guelph, a numbered company linked to Fusion Homes is looking to build 21 townhouse units and single detached homes at 300 Grange Rd.

The two detached units, shown in the composition above, would front on to Grange, with access to the three blocks of townhouses coming via a private road off Grange.

When the council got its first look at the proposal, notably at the same meeting as the aforementioned Arthur Street project, there were no public delegations. Ahead of the vote to receive the application, councillors didn’t raise any red flags, but Coun. Dan Gibson questioned how this development, if approved, would contribute to growing traffic on Grange.

A number of revisions were made to the Grange Road pitch this past March, including moving the private road to the south end of the property and changes to the type of rezoning being requested by the developer.