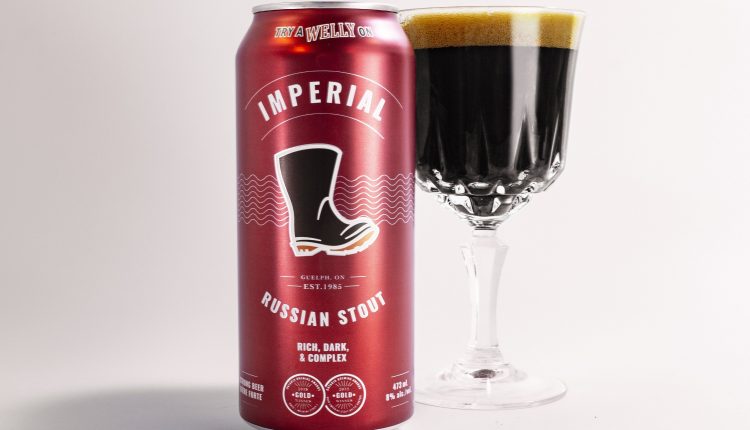 A Guelph craft brewery is considering rebranding a beer, that it has been brewing for more than two decades, because of the war in Ukraine.

“We are horrified watching the situation in Ukraine and firmly stand in support of Ukraine,” Wellington Brewery marketing manager Brad McInerney said in an email to the Mercury Tribune.

While Wellington Brewery hasn’t noticed a drop in sales of its Imperial Russian Stout, McInerney said a few customers have reached out to ask why Wellington uses that particular name for it.

“This style of beer is named after the strong English porters that were sold for export in the 1700s and were said to be a favourite of the Russian court,” said McInerney, explaining that history informed the name of the beer.

“This style of beer is widely recognized internationally and not something we chose arbitrarily,” he said.

The beer, which is eight per cent alcohol by volume, is sold in dark red cans featuring Wellington’s iconic boot logo, and has been brewed in Guelph since the early 1990s. It’s available year-round from the brewery, and is sold seasonally at the LCBO in winter.

McInerney said most people who are familiar with Wellington Brewery and its beer know the stout is not Russian, but a local product.

Still, he said rebranding the beer is a possibility.

“Unfortunately, we have tens of thousands of empty cans in stock,” he said.

Because of pandemic-related supply-chain issues, the brewery has had to stock up on packaging, he said.

“Any brand change would take many months and possibly as long as a year, unless these cans are destroyed at a large cost to our brewery,” he said.

In the meantime, Wellington has initiated a fundraiser in support of the humanitarian relief effort in Ukraine.

McInerney said for the remainder of the month of March, the brewery will donate one dollar from each pint sold in the Welly Tap Room to the Canadian Red Cross Ukraine crisis appeal.