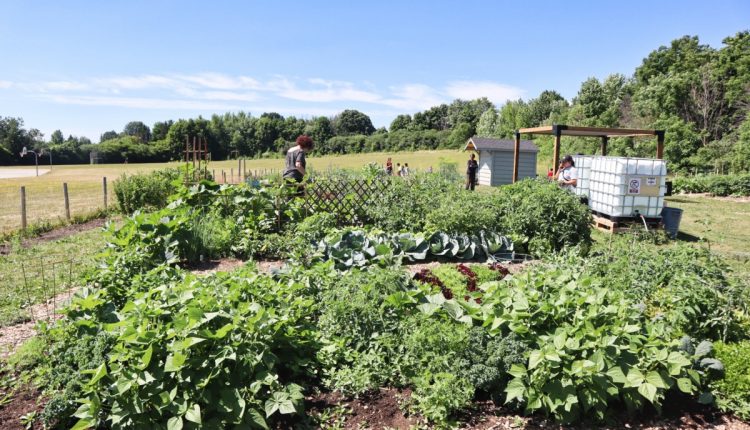 ‘People love it and feel they are a part of something,’ said Donna Bailey, president of the West Village Co-op

A community garden run by the West Village Co-op has bloomed into a social hub that is helping residents gain access to fresh produce.

Started two seasons ago, the Village Co-operative Garden is a West Village Co-op community project supported by the Wellington Catholic District School Board. The half acre plot of land is located at 150 Westwood Rd., beside St. Peter Catholic Elementary School.

“We didn’t even advertise, we started working putting the plots together and they just came, and we had a waiting list,” said Donna Bailey, president of the West Village Co-op.

Last year, Bailey said all the plots were split into four smaller plots. This year, the plots were expanded and are now used by 70 gardeners who serve over 200 people.

Bailey explains the neighborhood has a high population of immigrant and lower income residents, many who also live in high density spaces. She said the garden is making a ‘tremendous difference’ for those who are food insecure and what they can put on their tables.

“People will pick a pepper and say, ‘I can’t afford to buy this at the store,'” said Bailey. “It’s something so simple, but people are finding a way and feeling good about producing their own food.”

Besides individual plots, there is a communal herbal garden and a ‘food fence’ which fruits and vegetables planted around the garden’s perimeter. This produce is free for anyone to take and currently offers blueberries, raspberries and asparagus. Bailey adds any extra produce form the garden is donated to the Guelph Food Bank.

Along with local produce, the garden also grows produce not usually found in Canadian gardens, like Jerusalem artichokes. Bailey explains with many different ethnicities accessing the garden, people are delighted to find things they would cook with.

“So not only are they learning about Canadian vegetables, they’re having the opportunity to use things they are familiar with,” said Bailey.

While growing food, residents are also gathering with other people who have different cultural backgrounds.

“It’s an excellent experience, you meet so many people and get a wealth of knowledge from different countries,” said Wayne Holmes, a resident and owner of a plot in the garden.

Another plot owner, Mannie Reyes, agrees about the opportunity to meet others.

“I’m learning bit by bit,” said Reyes, who recently looked after the plot next to his for a neighbor one week. “It’s a good community.”

Bailey notes gardeners have asked to trade recipes and mention they feel a sense of peace coming to the garden.

“People love it and feel they are a part of something,” she said.

Recently, the West Village Co-op community garden was chosen for the Greener Greenspace Award from the Canadian Society for Organic Urban Land Care (SOUL). A release from the West Village Co-op said the Greener Greenspaces is a recognition program for sites from across Canada that showcase examples of ecologically-focused land care as a means to inspire others and to further the movement across Canada.

Vikki Dupuis, chair of the Wellington Catholic District School Board, received the award with Bailey. Dupuis helped to gain approval of the community garden on St. Peter school property.

Since being built, Dupuis said this community garden has helped students learn about sustainability, climate control and environmental stewardship.