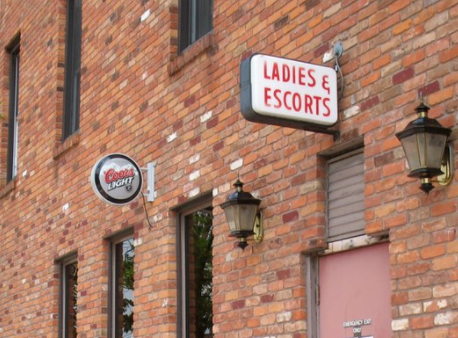 “WOMEN’S BEER PARLORS ARE A CURSE” yelled a Guelph newspaper headline on February 27, 1946.

The words were taken from a statement made by Rev. H.H. Chipchase, pastor of the York Road Baptist Church. He added, “When I came to Guelph some 15 years ago, there were lots of bootleggers, particularly in the east end, but there wasn’t nearly the drunkenness there is now … Beer has become too easy to get … When I recall the many times I have seen baby carriages parked outside hotels, I feel very strongly about the question.”

The question to which the reverend referred was “Should women’s beverage rooms be abolished?” It was a hot topic in Guelph that winter.

After the failed experiment with Prohibition, the Liquor Control Board of Ontario [LCBO] oversaw the re-opening of drinking establishments with the intention of also preventing a return to what its members considered the bad old days of the saloons.

The bars were to be places where middle class working men could drink moderately in a respectable manner. The decor would be plain – almost Spartan. Bartenders could not cash paycheques. Public drunkenness would not be tolerated. Alcoholic beverages would not be served to anyone under the age of 21. There would be no music, singing, dancing or “riotous, quarrelsome, violent or disorderly conduct.” Gambling was forbidden. In fact, no card games were allowed, period.

Persons known to be of bad character were to be barred from the premises.

Of course, there were rules to ensure “absence of sexual misconduct.” That meant no women.

Adult women could drink in their own homes, but women insisted that they had the same right as men to drink in public establishments. This brought about the uniquely Canadian response from the LCBO – the two-room tavern. One room was for men only. Not even female servers were allowed. The other room was for “Ladies and Escorts.” There, women could drink with other women or with their husbands or other male companions – or alone. However, although men’s clubs and legion halls could obtain permits to serve alcoholic beverages, women’s clubs could not.

The very idea of women drinking didn’t go over well with everybody. Women who drank were subjected to gossip and public criticism to a much greater extent than men.

The Women’s Christian Temperance Union, which had fought hard for Prohibition and against its repeal, denounced the Ladies and Escorts rooms as a threat to motherhood and to morality in general. The WCTU said that in addition to alcoholism, the rooms contributed to prostitution, sexual promiscuity and adultery.

In communities across Ontario, newspapers asked their readers if the women’s beer parlours should stay or go. In Guelph, an anonymous hotel proprietor and his bartender stated their belief that “the women have just as much right to drink – if they behave themselves – as the men.”

But other people who responded to the newspaper’s question came down firmly on the side of Rev. Chipchase. Some of them described scenes that could have come from a popular pro-temperance stage production called “Ten Nights in a Barroom.”

One unnamed Guelph housewife – “a well known resident of this city” – said, “The women’s beverage rooms are a disgrace to humanity and should be abolished. Right here in Guelph the other day – on Macdonell Street it was – I saw a child standing in the doorway of an apartment building. He was barefooted and was crying as if his little heart would break. I asked the child what was the matter and he told me he wanted to go out and play with the other children but he couldn’t because his mother had hidden his shoes.”

The boy told the woman that his mother hid his shoes to make sure he didn’t go out while she was absent, but it was colder in the apartment than it was outside. He wanted to go and get his mother out of the beer parlour so she could come home and light a fire in the stove.

A local social worker named Belle Dauphinee agreed that the women’s beverage rooms, which she described as dark and dingy, had an adverse effect on family life. When a male reporter jeeringly asked her, “What were you doing in a beverage room?” Dauphinee replied, “I’m glad you asked me that. I went in to get out a woman who had left her baby in his carriage outside for four hours.”

Dauphinee said she believed both men and women went to beverage rooms to “escape” and to seek companionship, but she concluded that “men have drank down through the ages and will continue to do so now and forevermore.” She felt that women’s beverage rooms should be replaced by other forms of recreation, such as community halls.

A Roman Catholic priest quoted in the Guelph newspaper also said the women’s beverage rooms were “a very real hazard” and “the cause of untold trouble.” But he saw nothing wrong with “properly-managed” beverage rooms for men.

In response to the suggestion that hotel managers across Ontario would welcome the shutting-down of women’s beverage rooms, Lester Davey, manager of Guelph’s Royal Hotel, disagreed. He said most of the stories of trouble in women’s beverage rooms came from five or six establishments in Toronto. “Guelph women, for the most part, are well-behaved,” he said.

Separate beverage rooms for Ladies and Escorts did eventually become a thing of the past when Ontario’s liquor laws caught up with the 20th century, and more meaningful and effective measures evolved for dealing with problems associated with alcohol. However, in this time when we are struggling with the inconveniences the pandemic has brought to our social lives, it might help to put things in a bit of perspective to look back to a day when it was not a virus, but a paternalistic attitude that made life complicated.