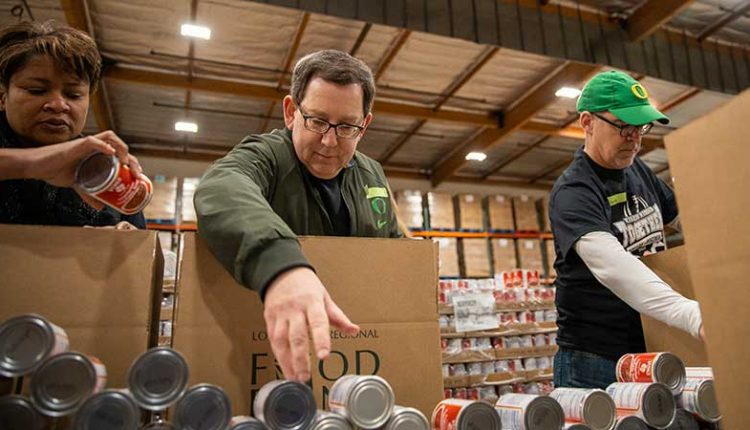 More than 100 community members from the University of Oregon and the University of Wisconsin spent the morning of December 31st at the Guelph Regional Food Bank assembling grocery boxes for the low-income elderly.

A total of 2,240 boxes were filled, a successful continuation of a tradition that began with a service project carried out in connection with the 2010 Rose Bowl performance by the Ducks against Ohio State University.

“The UO has a long history of organizing a volunteer service project that benefits and connects with the local community when we travel to major bowl games,” said President Michael Schill. “Giving back is an important part of our mission: education, research and service. We’re proud to work with our colleagues from the University of Wisconsin to fight hunger together.

The event was attended by the deans of the UO’s senior colleges, as well as staff and student leaders. After the volunteers started the service event with a video explaining how much the packages would help them to the recipients of grocery boxes, they assembled the boxes and then filled them with items such as fruit juice and cereal before sending the boxes for distribution sealed.

“Service is the rent you pay for the privilege of occupying space on this planet,” said Kevin Marbury, vice president, student life.

While the mission was serious, the mood was not. Both the Oregon Marching Band and the University of Wisconsin Marching Band were on hand to perform, and the Duck and Bucky Badger were there to help them out as much as they could. University employees in green and red worked together, putting the Rose Bowl rivalry aside to help the less fortunate.

“It is important to serve the people in our community because food insecurity is a huge concern and it is very important to work together to do what we can,” said Sabinna Pierre, president of the University of Oregon Associated Students.

The ASUO and the Office of the Dean of Studies help oversee the UO’s food security programs on campus, which address student food insecurity issues not dissimilar to those receiving the LARFB’s food boxes.

“It helps students faced with food insecurity,” explained Pierre. “By making sure we are providing resources to students, they can do well in the classroom.”