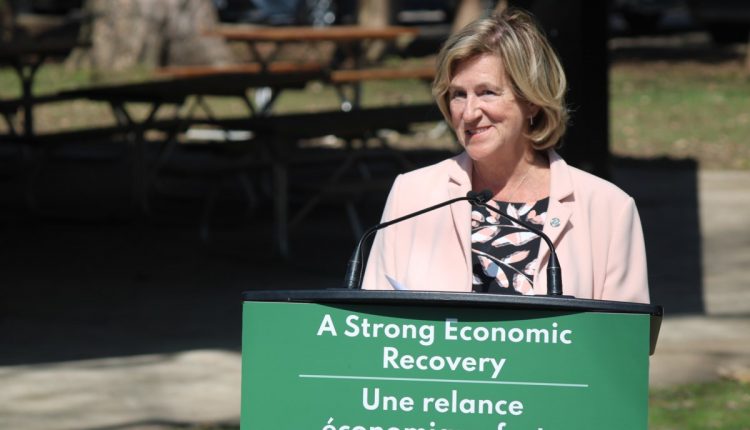 These were among eight projects set to share over $2.6 million from FedDev Ontario

GUELPH/WELLINGTON – A revitalization of Guelph’s Riverside Park was among eight projects announced to be receiving a combined $2.6 million in federal funding on Friday.

At a press conference at Riverside Park, Helena Jaczek the minister responsible for FedDev Ontario, announced the investment into community projects in Guelph and Wellington County through the Canada Community Revitalization Fund and Tourism Relief Fund.

“With this support, eight not-for-profit organizations and municipalities like the City of Guelph will be able to build and improve their community spaces,” Jaczek said.

Riverside Park will be getting $750,000 with upgrades to the park bandshell, washrooms and the electric train highlighted.

Guelph Coun. Rodrigo Goller said the park has been a much-loved destination in Guelph for the over 100 years it’s been open and the Riverside Express train is an iconic attraction.

“With this investment we’ll be able to build an all-season storage facility so that we don’t have to take the train off the tracks every fall and bring it back every spring,” Goller said, adding investment to the bandshell will renew an underused asset to the park.

10C Shared Space also received a big investment, just under $710,000, with Jaczek explaining this is to expand the Guelph Farmers’ Market to be open seven days a week. The Guelph Hiking Club will receive $15,000 to improve a section of the Trans Canada Trail.

Wellington County municipalities Guelph/Eramosa, Center Wellington, and Minto also got a share of the funding.

Center Wellington will be getting around $210,000 to install a new permanent public washroom at Hoffer Park behind the township office.

Center Wellington deputy mayor Neil Dunsmore said in an interview this is not an ordinary washroom.

He explained whenever a person leaves it, the washroom locks and it cleans itself.

“We don’t have to check it three times a day because it literally self cleans,” Dunsmore said.

Guelph/Eramosa is also getting a washroom at one of its parks. A press release stated the township is getting $750,000 to build a gender-neutral and accessible washroom and an adjoining outdoor pavilion at Rockmosa Park.

The Erin Agricultural Society is getting funding for two projects, about $40,000 to upgrade electrical infrastructure at the fairgrounds and a further $82,000 to expand the 2022 Erin Fall Fair.

For the Town of Minto’s Clifford Rotary Celebration Square project, the town is getting $65,335 which town officials said will get finalized at an upcoming council meeting.