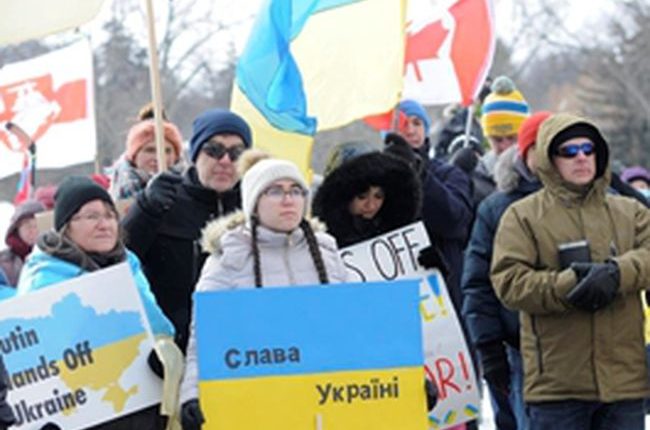 Across the country, Canadians have been rallying to show their support for Ukraine in the face of Russian aggression.

The invasion of Ukraine has captured the world’s attention, and many in the Royal City are looking for ways to help.

But with reports of people trying to take advantage of the situation online, people want to know their efforts are going to the right place.

To help, the Mercury Tribune has compiled a list of legitimate organizations providing humanitarian relief for Ukrainians.

1. If you’re looking to help locally, the Holy Protection of the Mother of God Ukrainian Catholic Church in Guelph has put together donations of diapers, baby formula, baby clothes, used baby strollers, energy bars, first aid kits, winter clothing and money to help with logistics. A post on their Facebook page on Feb. 28 says that a shipment of eight pallets has already been gathered, and is being shipped to Poland to help Ukrainian refugees. The church will again be accepting donations at their at 115 York Rd. location in Guelph on Mar. 6, from 10 a.m. to 1 p.m.

2. The Ukrainian Church also asks that Guelphites petition their representatives to ask them to provide further military aid to Ukraine and encourage stricter sanctions against Russia. Letters can be sent to Guelph MP Lloyd Longfield at [email protected], and Guelph MPP Mike Schreiner at [email protected] The Ukrainian flag has been raised at Guelph city hall as a show of solidarity.

3. The Canadian government was matching donations to the Canadian Red Cross, but has since met its $10-million target. Donations can still be sent, and the Red Cross says they are being “used to respond to humanitarian needs generated by almost eight years of conflict, as well as preparedness and response efforts due to heightened tensions in Ukraine” and surrounding countries.

4. The Ukrainian Canadian Congress, who represents Canada’s Ukrainian population to the Government of Canada, is also asking for monetary donations. A campaign has been arranged with the Canada-Ukraine foundation on canadahelps.org. A release on their website says they have already deployed $500,000 toward food, medicine and shelter to those displaced by the conflict. The group says they have raised over $4 million from government bodies, private and public organizations, and “thousands of Canadians from coast to coast” as of Feb. 28.