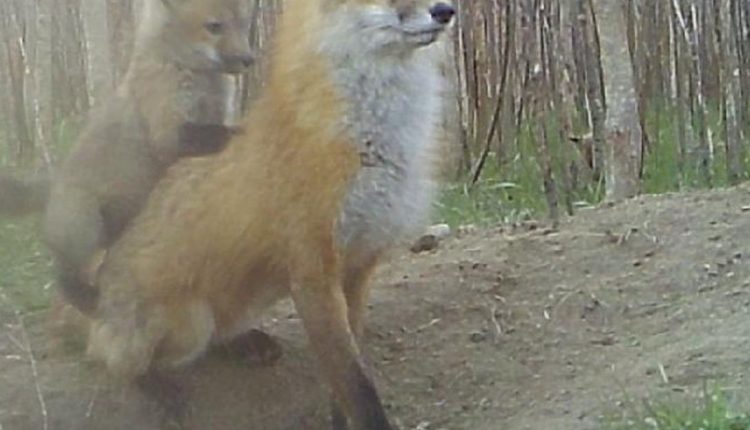 ‘Cuteness alert!’: U of Guelph prof’s fox movies showcase wildlife within the metropolis

Still images taken from videos captured by trail cameras set up by University of Guelph professor Alex Smith in the Dairy Bush mainly show foxes near their den, but occasionally, other wildlife makes it into the scene.

Many people may be unaware of some of the wild residents living right in the heart of the city, but University of Guelph biology professor Alex Smith has been watching — and filming — them for years.

“They’re kind of always here,” said Smith of the foxes and other animals that live in the university’s Dairy Bush.

For more than a decade, Smith has been documenting the forested area, located near College Avenue and Edinburgh Road, with Gigapan images. The images are created through a process involving taking many photos and using computer software to knit them together, creating extremely high-resolution pictures.

It was on his regular excursions to the Dairy Bush, and while waiting for his robotic camera to capture its series of image, that he noticed the fox dens.

Smith, who had already been using trail cameras as part of his field research in Costa Rica, decided to set up some cameras in the Dairy Bush and see what they would capture.

“It’s kind of a neat way to continue to learn about a place,” Smith said.

The resulting videos were one more way to document and share information about the area with biology students.

But Smith has also shared them on social media, much to the delight of his followers.

“People respond on Twitter and say, ‘this is the highlight of my day,’” he said.

The short videos include scenes like kits at play, mother fox nursing her kits, father fox dropping off a meal of a small mammal, young kits exploring the area around the den, grooming and more.

Smith shares them with headings like “Cuteness alert!,” “Recharge here!” or “Timeline cleanse!,” knowing there are people who will welcome the chance to watch 60 seconds of something adorable before moving on with their work day.

“The more people who can enjoy it and kind of learn from it, the better,” he said.

The cameras are not part of a formal study of the foxes, but from their footage, Smith has made some interesting observations.

For example, last year the den was home to two families, with four adult parents raising their kits together. This year, there are a smaller number of foxes, but there appear to be three adults, suggesting an older sibling may be hanging around to help with the little ones, Smith said.

Foxes are not pack animals like wolves, so it’s interesting to see them living in a group while raising their young, he said.

The cameras also capture other animals around the den. In fact, it appears the den is home to a number of different species, Smith said, describing the skunk family that hibernated there before the foxes moved in.

“By the end of the summer, it’s probably going to have a groundhog in it,” Smith said. “It has been a really fascinating way to look at how … all these medium sized mammals use this space.”

His cameras have also captured footage of raccoons, porcupines, squirrels, rats and even a European fallow deer — a non-native species whose origins in the city are a mystery.

While reluctant to reveal the exact location of the fox den, Smith said it’s “surprisingly public,” and “close to a lot of activity.”

People may not notice the foxes and other wildlife because they do a good job of steering clear of people.

“That’s one of the things that makes me really emotionally attached to the project,” Smith said, explaining that it is a reminder of the animals that share the city.

It’s also the sort of project that makes him love his job, he said.

“These kinds of projects, with dirty knees and dirty boots, those are the things that made me want to do this job,” he said.

People can check out Smith’s #DairyBushFoxDen videos on YouTube.