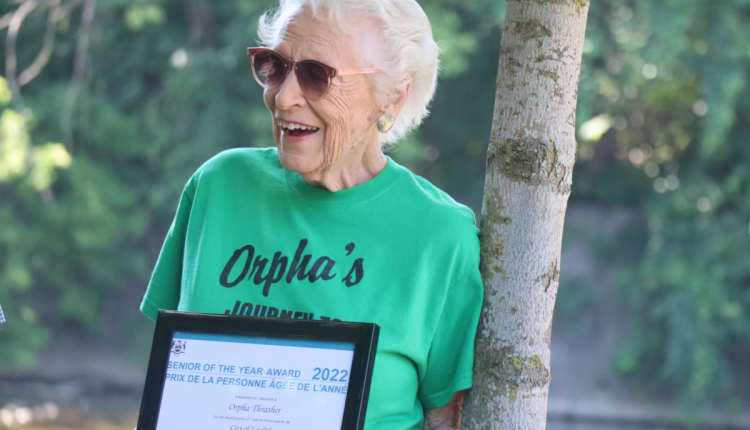 An honour for Orpha, Guelph’s senior of the yr

Senior of the year, Orpha Thrasher, celebrates by taking a walk around Riverside Park

The City of Guelph honored 100-year-old Orpha Thrasher as its senior of the year on Saturday.

Thrasher completed 100 walks leading up to her 100th birthday and in doing so raised $23,000 for Hope House.

To celebrate her honour, Thrasher led a walk around Riverside Park on Saturday then headed to The Wooly Pub for lunch.

“I didn’t really start this religiously until after my husband died and he died in 2011. I just thought in his memory the best thing I could do was walk. He was a great walker.”

Thrasher doesn’t use a walker and is completely mobile, she attributes her walking to good hip and knee health.

Her journey is an inspiration to many. When people came across her Facebook page Orpha’s Journey to 100, they reached out to ask if they could walk with her. Appointments for walks with Thrasher started, her daughter Shelley said she couldn’t believe it.

“We all decided to do it with her. It was the most amazing thing,” said Shelley Thrasher. “A lot of people said, you’ve inspired me to walk.”

Despite days with bad weather Orpha insisted her children walk with her.

Jasper Crealock-Marsh, 10, took note of Orpha’s journey. He was turning a decade old the day after Orpha turned a century old on February 1, 2022. So he thought he would join in by also going for a 100 walks before his birthday.

“I’m impressed, like, I haven’t seen someone so old be in such good shape and I just like her,” said Crealock-Marsh.

Orpha said she didn’t realize there were so many different places to walk in Guelph until she started exploring and found it nice to have new terrain to walk on.

“If you’re only 60 for instance and you feel like you’re not doing enough, do a little more. You’ll thank yourself later on for doing it because the fact that I can move without a walker, I’m very happy about,” she said.

“I’ve never been one to go to the gym or lift weights.”

She said her family genes may have also contributed to her great health and activity. She grew up a farmer where labor was part of everyday activities.