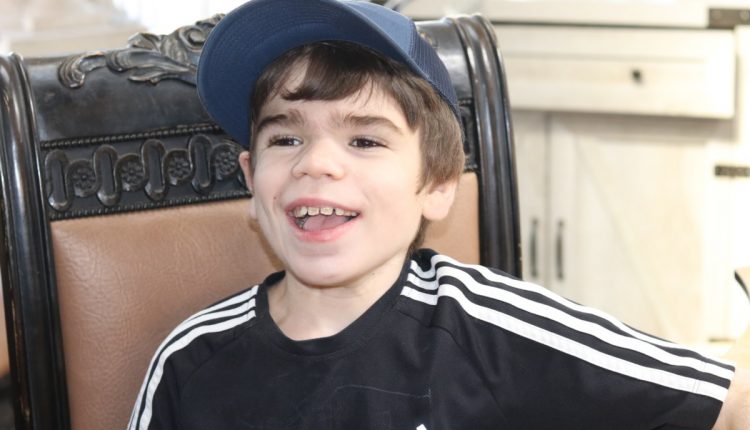 A rare and terminal metabolic disorder likened to childhood Alzheimer’s disease, Sanfilippo Syndrome only affects around one in 70,000 live births. They include eight-year-old Joseph Saliba of Guelph.

The condition is marked by severe symptoms like progressive dementia, mental regression, developmental delays, declining motor skills, aggressive behavior, hyperactivity, some deafness and vision loss, and the inability to sleep for more than a few hours at a time.

Like many children with Sanfilippo, Joseph appeared healthy when he was born, and wasn’t diagnosed until he was four. But his mom, Francine Saliba, first noticed something was wrong when he was 14 months.

“For the first year, he was very advanced for his age. First word at three and a half months and then other words like mama, nana, doggy, all within the first year,” Saliba said.

By nine months, he was running around everywhere. But at 14 months, he started getting chronic ear infections.

No matter how much medication they gave him, the infections just kept coming back. So he had ear tube surgery – three times – but the damage was already done.

“He lost 80 per cent of his hearing in the one year because it was constantly clogged. Then that delayed his speech unfortunately,” she said.

Chronic ear infections are one of the first symptoms that show up, and a lot of doctors end up wrongly diagnosing the cause, instead pointing to more common issues, like allergies.

Then other symptoms started to show up: a constant runny nose; he had a protruding belly and an umbilical hernia. By four-years-old, he began developing predominant facial features.

“Now with each kid it’s different. But with what he has, they become a lot hairier, bigger noses, bigger heads, bigger lips.”

After chasing a diagnosis for two years, they finally saw a geneticist at McMaster, who knew it was Sanfilippo right away.

They took bloodwork and urine samples for genetic testing from Joseph and Francine, which confirmed the diagnosis: that it was one of seven rare mucopolysaccharide (MPS) disorders.

Children with Sanfilippo Syndrome, or MPS III, are missing an essential enzyme that breaks down a complex body sugar called heparan sulfate, which is a glycosaminoglycan, or GAG for short . Because it can’t be broken down, the GAGs will keep getting bigger and bigger; it will slowly build up in the bones, the brain and other organs, stopping normal development and causing brain damage.

“It’s kind of like a slow death,” Saliba said.

While each kind of MPS is clinically different, those afflicted with it will typically start out with normal development followed by a decline of physical and mental function.

Because it attacks the brain the same way dementia does, they typically forget the first words they learned, losing their language skills, followed by a loss of motor function. By age 10, they usually lose the ability to walk.

“Eventually, their liver, their heart, their intestine, everything starts to enlarge, to the point where they have to be in a wheelchair or in a vegetative state, or have breathing tubes and a feeding tube.”

This is how the disorder progressed for Joseph.

When he was younger, he was able to “climb up on the playground and stuff like that,” Saliba said. He’s always loved music, and when he was two, she said he loved playing around on the drums. “But with COVID, he went downhill.”

Now, at eight-years-old he’s completely dependent on Saliba: she has to feed him, he’s in diapers, he can’t walk, he’s lost his language skills. Even so, he’s still a “happy-go-lucky” kid with an infectious laugh.

Research into the condition only really started in 1963, when Dr. Sylvester Sanfilippo first articulated the disorder. Today, there is still no cure. Instead, medical care is directed at treating conditions and improving quality of life, which is what Saliba is trying her hardest to do for Joseph.

Two years ago, she tried to get him into clinical trials for the only existing treatment option approved in Canada, which is gene therapy. But the pandemic paused trials, and his mental state continued to decline throughout the past two years, so he’s no longer a candidate.

“You need to have a certain mentality of a certain age to get accepted for the program,” she said. “So at least what I can do is start making awareness, because this is one of the worst things to see.”

A lot of pictures, not sufficient objectives for Guelph Storm